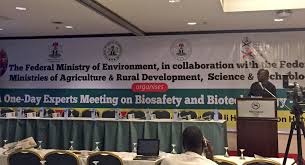 WHAT DO THESE ANTI-GMO ACTIVISTS WANT By Gbadebo Rhodes-Vivour

August 21, 2016 Comments Off on WHAT DO THESE ANTI-GMO ACTIVISTS WANT By Gbadebo Rhodes-Vivour 35 Views 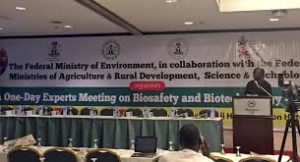 In their opening remarks, they made it clear that they look to these conversations to give them guidance in respect to policy direction of GMO’s in agriculture. The event though apparently organized by the Ministry of Agriculture and Environment, was dominated mainly by PRO-GMO voices such as NABDA and OFAB, as well as several PRO-GMO scientists and bio-safety administrators.

All the Keynote speeches and papers presented were by PRO-GMO DG’s and scientists. In a meeting apparently put together to shed light on this GMO controversy, it was unfortunate that these presentations were mostly half-truths, belittling health concerns as well as contrary scientific opinions that have been on the rise.

Several presenters pointed out to the fact that this technology is not new, it has existed for over 20 years and has been used in America and Canada. None of them were interested or curious to explain, if a technology has been used for over 20years, shouldn’t it be normalized by now? If indeed there was no cause for concern, should it not be controversy-free by now? Why is it that Japan a science and technology powerhouse and the third largest economy in the world have tight restrictions on GMO commercialization and consumption?

Why is it that six out of the G8 countries (the most powerful in relation to their economy and development), have strong restrictions on the cultivation and consumption of GMO? Apart from USA and Canada who are the main originators and producers of this technology?

Regulatory framework and Infrastructure.
In June 2015, The EU banned the importation of Nigeria’s dried beans because the produce contained extra ordinarily high levels of pesticides which are dangerous to human health. The rejected beans were found to contain between 0.03mg per kilogramme to 4.6mg/kg of dichlorvos pesticide, when the acceptable maximum residue limit is 0.01mg/kg. The embargo is a reflection of our inability to adhere to global standards. Despite efforts by the Federal Government and its relevant agencies to lift the ban this year, the ban has been further extended for another three years. According to the EU officials the ban was extended because

There are 4 key points to take from this.
– The EU does not compromise the health of its citizens.

– The Nigerian regulatory system does not have the capacity to look out for the wellbeing and health of Nigerian citizens. After all we are still eating these toxic beans. No one told us that the beans we have been consuming is toxic and this would not have been an issue if the EU did not raise the alarm.

– Contamination of our food occurs because our farmers are not getting the extension services they should be getting. Most of them are illiterates and can barely read the instructions.

From this example it is clear that Nigeria does not have the robust infrastructure required to regulate and monitor basic agricultural practice. How then do these agencies imagine they can monitor and regulate GMOs?
None of the presenters spoke about contamination of natural varieties caused by wind drift of pollen, neither did any of them speak about the fact that these Monsanto, Sygenta, Bayer and Dupont GMO products do not self proliferate. Every year our government would have to buy these seeds from these foreign multinationals at prices significantly higher than those of natural seeds. This will add further pressure on our currency. It is for this reason that India is considering kicking Monsanto out of India and reverting to its indigenous cotton. They have also put price controls and restrictions on Monsanto’s cotton seeds.

The price was too high
None, not one of the presenters spoke about weed and pest resistance that has emerged in America, India, Brazil and everywhere GMO’s are planted, leaving farmers to resort to older more toxic pesticides and herbicides.
Labelling
Despite everyone agreeing that GMO foods should be labelled, not one presenter explained how labelling would be achieved in a country where 95% of food consumed are purchased unpackaged in their raw state from market stalls, and on roadsides, as opposed to grocery stores. Do they plan to revolutionize the food processing and packaging industry overnight? How would the woman selling roasted corn on the side of the road label her roasted corn? With Monsanto as a major sponsor and partner of NABDA and OFAB, Why don’t these institutions take Monsanto and Sygenta to task as to why they repeatedly fight labelling laws in America, consistently denying the consumers the right to know if their food is GMO? Are they not proud of their products? What do they have to hide? For a technology that is not new, how is it that in its birthplace, it is still riddled with controversy, so much so these companies would rather hide rather than proudly label their products?

Export market Jeopardized
With the current state of our economy, it is of vital importance that we produce products that can access as many markets as possible. This is a quote from leaked cables between American Ambassador Howard F. Jeter to Washington.
“Many agricultural experts in both the private and public sectors have close professional connections to Europe and are sympathetic to European opinions. This is particularly true of Nigeria’s limited agricultural export sector, which exports mainly to Europe (though sometimes through Third World countries – such as India – where processing takes place) and could face the dilemma of having to chose between biotechnology and continued access to European markets.”
Organic foods can access all markets GMOs cannot.

Health Risk
One would hope that a regulatory agency whose mandate is to secure the lives as relates to GMOs, would at least investigate all the scientific claims linking cancers to GMO consumption, endocrine disruption, colorectal cancers as well as the effects of these pesticides and herbicides associated with GMOs on human health. Yet not a single mention of these considerations was made.
So what do these Anti-GMO activists want?
We want truth, we want an honest conversation that looks in to all these considerations and puts the health and well being of Nigerian citizens first. We the people must remind the government that THEY WORK FOR US. IT IS US THAT WOULD DETERMINE WHAT IS GOOD FOR US TO EAT. Not half-truth telling scientists that choose to ignore not only scientific data but precedents set by some of the most scientifically advanced countries in the world.
Our research institutions need to be strengthened, so that our scientists would not be susceptible to the manipulations of foreign interests. Food security is a major aspect of National security and solely Nigerian scientists with the interest of Nigeria at heart should be giving clearance to operate in these high impact programmes.

Our government needs to start investigating and researching the natural and organic agricultural practices of nations like Russia, Japan and France. Our government needs to investigate and invest in agro-economic agriculture and integrated pest management as well as technologies that use nature to fight nature e.g. new technology that uses air propulsion to remove weeds as well as low tech roller weed cutters.

This conversation cannot and should not be dominated by an extremely costly and non dependable technology that has been riddled with failures and controversy all over the world, when there are cheaper more natural approaches to solving these problems. Our government needs to actively seek out the full breadth of the conversation in order to make sustainable policies for the Nigerian people.

Share
Previous John Kerry’s Visit: Beyond The Cover Story By Reuben Abati
Next We Are Proud Of Your Bronze Medal, Saraki Celebrates Dream Team VI