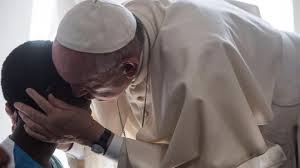 August 13, 2016 Comments Off on Pope Pays Surprise Visit To Nigerian Prostitutes, Others 21 Views 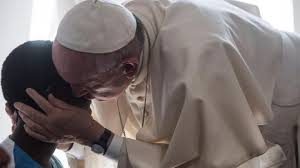 Pope Francis on Friday surprised 20 former prostitutes with a visit including seven Nigerians in Rome for a chat.

The pontiff, who had repeatedly described human trafficking behind much prositituion as “a crime against humanity” had over an hour chat with the woem including four from Albania, six from Romania, and the rest from Tunisia, Italy and Ukraine according to a Vatican statement.

In the statement the visit fell under what has been termed Francis’ ‘Fridays of Mercy’, which see him carry an unscheduled act of mercy on a Friday in the month.

This takes place mainly in or near Rome throughout the pope’s Jubilee year, which started in December and runs to November.

“Today’s visit by Pope Francis is another call to conscience to fight the trafficking of human beings, which the Holy Father has on several occasions defined as a crime against humanity,” the Vatican said in a statement.
Pope Francis had earlier visited a migrant centre on the Greek island of Lesbos and a care home for the elderly and mentally ill persons in Rome, Italy