August 9, 2016 Comments Off on JAMB Registrar Takes Over, Warns Staff Against Indiscipline 42 Views 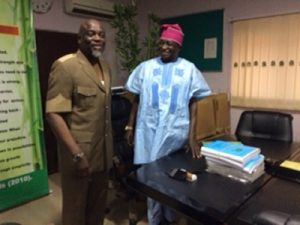 The newly-appointed Registrar of Joint Admission Matriculation Board(JAMB) and Chief Executive Officer, Prof. Ishaq Oloyede has officially taken over the affairs of the board, vow to enforce discipline.

Professor Oloyede sounded the warning on resumption on Monday at the exam body office in Abuja.
He said his appointment was divine as he never believed he would preside over the affairs of JAMB .

In his remarks, he said he would build on the legacy by his predecessors and change whatever deserves to be changed.

On his part, outgoing Registrar, Prof. Dibu Ojerinde appealed to the staff to cooperate with the new JMAB Registrar to sustain the legacies of the board.