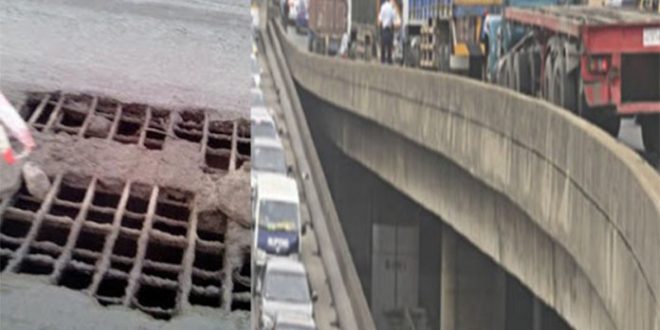 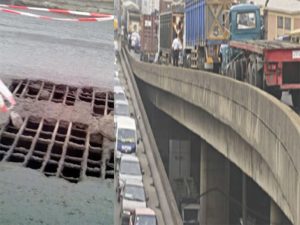 The federal government yesterday shutdown the Apapa-Ijora Bridge in Lagos to outward bound traffic for quick rehabilitation, even as it admitted that the engineering drawings for the bridge constructed in the 1970s, are missing.
THISDAY had raised the red flag last week over the extreme deterioration of the bridge, which has massive holes that have exposed the steel rods supporting it.

Apart from the caved in portion, investigations also revealed that some of the pillars under the bridge had structural defects due to fire incidents that had worn off the concrete and exposed the iron rods.

The state of the bridge, which carries heavy traffic everyday, including articulated trucks conveying petroleum products from the depots in Apapa and goods’ containers in and out of the seaports, is not only a threat to lives and property, but has exacerbated the gridlock in that section of the Apapa central business district and enable traffic robbers to have a field day.

However, inward bound traffic into Apapa will remain open throughout the period of the bridge’s repairs, said the Minister of Power, Works, and Housing, Mr. Babatunde Fashola at a meeting with stakeholders at the Area B office of the Nigeria Police, yesterday.
Fashola said outbound vehicles from Apapa would have to use alternate routes, including the service lane beside the distressed bridge or the Orile stretch or Ajegunle axis.

The minister said he was not unmindful of the pain the expected bad traffic would cause during repairs of the bridge, but that it had become imperative to repair the bridge immediately to avoid deaths and loss of property if it eventually collapses.
The minister said it was uncertain the length of time the repair would take, because the company that built the bridge, Guffanti, no longer does business in Nigeria and Julius Berger that was going to do the repair would have to find a way around it, because the engineering drawings were misplaced when the federal government relocated the Works Ministry to Abuja.
He said the bridge and other infrastructure deteriorated following many decades of neglect by successive governments and from the activities of people who traded illegally under the bridge.
“We are dealing with many years of neglect and the result has now come to the fore. There are quite a number of bridges across the nation that need maintenance and we were developing some plans for the repairs next year,” he added.

Fashola, who said he was tempted to shutdown the bridge last Thursday when he went under it, noted that his initial reaction was to save lives but that he thought it was important to coordinate things with inputs from the state government, stakeholders and unions at the ports.
“We chose between inconvenience we know would come and the danger but with the cooperation of your members, we could minimise the inconvenience,” he told stakeholders.

He told the heads of the port haulage association and petroleum unions to move their trucks out of the right of way at the designated alternative routes, adding that they had been served notices to move and that enforcement would follow shortly.
He said: “This should not be used by your members not to supply fuel efficiently in Lagos. Tell your members to move from the right of way for free flow of traffic.”

The union leaders appealed to the minister to speed up the repair work because of the adverse effects the slow traffic would have on their business.

The Lagos State Commissioner for Transportation, Dr. Ekundayo Mobereola, said all the security agencies would be involved in clearing traffic around Apapa.

Share
Previous Rescue of Iba monarch: Police Arrest Two Suspects
Next Okah Is Out To Assasinate Me , Jonathan Alleges