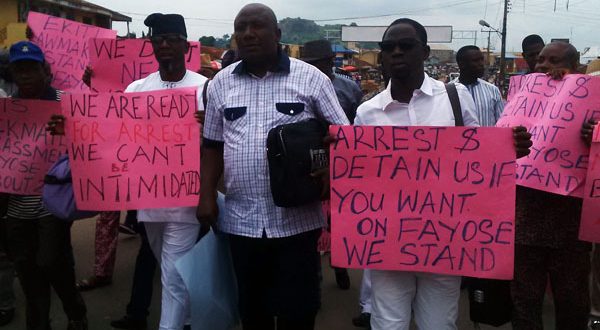 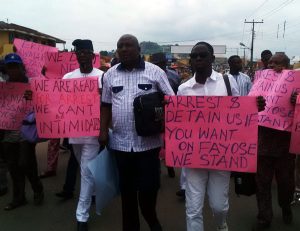 Members of Ekiti State House of Assembly have condemned the incessant harassment of top functionaries of the State government, members of
the House of Assembly and members of the Peoples Democratic Party (PDP) in the State with security agents, saying the new Inspector General of Police (IGP), Ibrahim Idris should be mindful of allowing the police under him to be used to truncate democracy.

The lawmakers, who described the latest attempt to invade the State by 20 policemen led by one ACP Olusola Oke, a native of Isan Ekiti, hometown of Minister of Solid Minerals and former Governor of the State, Dr Kayode Fayemi as an assault on democracy, added that the new IGP must emulate his immediate past predecessor by rejecting pressure from APC leaders from Ekiti State to use the police to cause chaos in the State just because they lost an election that was adjudged as free, fair and credible.”

According to a statement issued on Sunday, and signed by the Speaker, Rt. Hon. Kolawole Oluwawole, the lawmaker said; “harassing PDP members
in Ekiti State, government officials and members of the State House of Assembly will not help democracy in Nigeria and the international community should help Nigeria to sustain Democracy by calling the APC-led federal government to order.”

The lawmakers said it was becoming ridiculous that the APC was still making issues out of an election that the party lost two years ago, adding that “plotters of evil against Governor Ayodele Fayose and his government must know that we in the House of Assembly will not present ourselves to be used against our governor. They should know that even if we are arrested and detained for one year, we won’t collaborate with those plotting evil against Governor Fayose.”

“If two years after losing a free, fair and credible election and exploring all legal options up to the Supreme Court, some people are still running from the Army, DSS, EFCC and Police, writing frivolous petitions, law enforcements agencies in the country, especially the police should be mindful of turning itself to tool in the hands of those who are obviously out to truncate democracy in Ekiti State.

“The IGP should rather ask, what is the sense in writing over 100 petitions over an election conducted in just 16 local councils and was adjudged as free, fair and credible even by International Observers, including the United States Government. Nobody was slapped not to talk being killed during the election.

“Nigerians should be reminded that the DSS has earlier been used to invade the State House of Assembly with a member of the House, Afolabi Akanni abducted and detained for 18 days without any offence.

“Despite these harassments however, we will remain undaunted in our unflinching support for the our governor, Mr Peter Ayodele Fayose and wish to state that freedom of thought and expression is guaranteed  by the Constitution of the Federal Republic of Nigeria, and in exercising this right, Governor Fayose won’t be intimidated by any agency of the federal government.

“No amount of intimidation, arrest, detention, harassment and monetary inducement will make us dance to the tune of those whose only interest is to truncate the Fayose-led government and return to power through the backdoor.

“Nigerians should be reminded that these APC elements lost election in June 2014 and they lost four other elections in 2015. They should stop trying to get to power through the backdoor. They should stop this harassment, intimidation and use of federal power to oppress innocent Nigerians.

Finally, we wish to tell those behind these evil plots against the government and people of Ekiti State that like every of their previous plots, they have failed.”