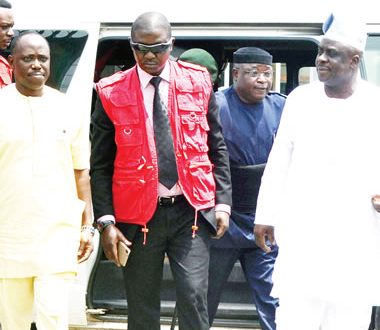 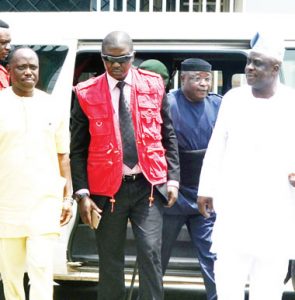 The Economic and Financial Crimes Commission has told the immediate past Chief of Air Staff, Air Marshal Adesola Amosu (retd.); a former Chief of Accounts and Budgeting in Nigerian Air Force, Air Vice Marshal Jacob Adigun; and a former Director of Finance and Budget, Air Commodore Olugbenga Gbadebo, to forfeit the 33 properties they allegedly bought with stolen funds.

This, it was learnt, was part of the conditions for the plea bargain given to the three accused persons.

A security agent, who did not want his name in print, told our correspondent that apart from forfeiting the properties, Amosu, Adigun and Gbadebo would be asked to plead guilty, after which the EFCC would appeal to the court to temper justice with mercy.

The accused persons alongside eight companies are being accused of stealing N22.8bn from the coffers of the NAF between 2014 and 2015.

A source said, “We will not want to rock the boat because negotiations are still ongoing. However, since Amosu, Adigun and Gbadebo have opted for plea bargain, we expect them to permanently forfeit all the properties linked to them.

“Afterwards, they will enter a guilty plea and receive a reduced sentence. This was what we did for the Managing Director of the defunct Oceanic Bank, Mrs. Cecilia Ibru, who was jailed after she pleaded guilty and forfeited 103 choice houses and shares in 77 companies in Nigeria in 2010.

“It is the standard practice worldwide and it will save everybody’s time.”

Documents made available showed that Amosun, Adigun and Gbadebo had returned over N2.8bn to the Federal Government, while properties such as plazas, schools, mansions, farms, a hospital and a quarry had been seized from them.

While almost N2.6bn cash has been recovered from Amosu, Gbadebo has returned N190m. Adigun’s wife, returned some money as well.

The document further stated that properties recovered from Adigun were worth N9.6bn.

Some of the properties include a shopping plaza known as Capadar Plaza on Adetokunbo Ademola Crescent, Wuse 2, Abuja, which is worth N980m; a residential mansion on Lake Chad Street, Maitama, worth N450m; an executive mansion in Imo River Close off Dandube Crescent, Maitama, worth N710m, and a four-unit terrace on Agadez Street off Aminu Kano crescent, Wuse 2, worth N720m.

Some other properties said to belong to Adigun included a 35-room uncompleted hotel on Salt Lake Street, Maitama, Abuja; a parcel of land located on Bourdillon Street, Ikoyi, Lagos; a block of 12 service flats located on Agodogba Street, Park View Estate, Ikoyi, said to be worth N1.8bn and a quarry in Bwari area of Abuja worth about $694,000.

The source added that all the properties had been seized temporarily.

He added that some of the properties seized from Amosu were worth N1.5bn. They included a house on Adeyemo Alakija Street, GRA Ikeja, worth N250m; a duplex at House 11, Peace Court Estate, GRA Ikeja, worth N110m; a N40m property located at NAF Harmony Estate, Asokoro Base, and a five-bedroomed house at Valley NAF Estate, Port Harcourt, worth N33m.

Others include a hospital on Adeniyi Jones Avenue known as St Solomon Hospital, with equipment worth $2.15m; and a N95m house on Umaru Dikko Street, Jabi.

The properties seized from Gbadebo are said to be worth N495m. They include a fish farm worth N10m; a N20m poultry Lagos and a school known as Bloomsville International School, Divine Estate, Isheri Olofin , off Lagos-Ibadan Expressway.

Apart from Nigeria, Adigun and Amosu also own two homes in posh areas of London in the United Kingdom.

Calculations by our correspondent showed that the cash and assets which the air force men might forfeit permanently added up to about N15bn which was more than three quarters of what they allegedly stole.

Speaking with our correspondent recently, the Chairman, Presidential Advisory Committee Against Corruption, Prof. Itse Sagay, said once a criminal matter had been brought to court and the accused person brought up a negotiation, there must be some form of punishment.

According to him, plea bargain is done all over the world, adding that it saves time and money.

The Senior Advocate of Nigeria explained that plea bargain in Nigerian law is for the purpose of saving the state the time and resources from prosecuting a case over a long period of time and still end up not achieving a conviction.

He added, “The point I want to make is that once a case has been taken to court, there can be no negotiation of return of money without punishment. That is impossible and can never happen because if that happens, then it is breach of the law.”