Fani-Kayode, Usman, Others Get N1bn Bail 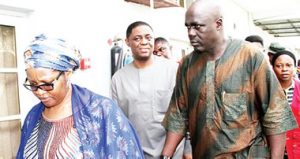 A Federal High Court in Lagos yesterday granted a bail of N250 million each to a former Aviation Minister, Femi Fani-Kayode and three others charged with money laundering. Fani-Kayode, who was also the Director of Media and Publicity in the campaign organisation of ex-President Goodluck Jonathan, was arraigned alongside a former Finance Minister, Nenadi Usman, and Danjuma Yusuf. Also charged with them is Joint Trust Dimension Nig. Ltd.

The Economic and Financial Crimes Commission (EFCC) had slammed a 17-count charge bothering on unlawful retention, unlawful use and unlawful payment of money to the tune of N4.9 billion on the defendants. The money was for the prosecution of the 2015 presidential election. In a ruling yesterday, Justice Sule Hassan held that the accused persons were entitled to bail as there was no evidence to prove that they would interfere with investigation if granted bail as being canvassed by the EFCC.

The judge further noted that denying the accused persons bail would not serve the interest of justice, especially as the court would soon proceed on vacation. Accordingly, he admitted the first, second, and third accused persons to bail in the sum of N250 million each with two sureties in the like sum.

Each surety, according to the judge, must exhibit evidence of landed property in Lagos and must submit their international passports to the court’s registry. The judge also directed that all documents must be verified by the EFCC within seven days.