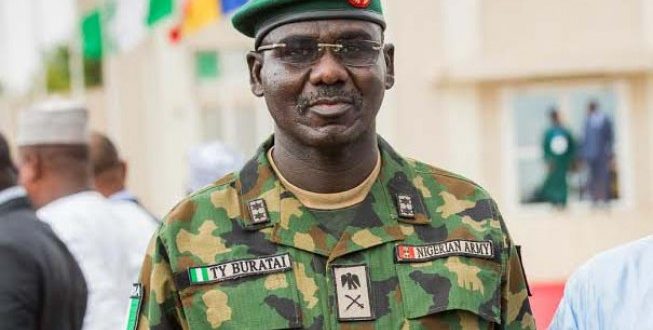 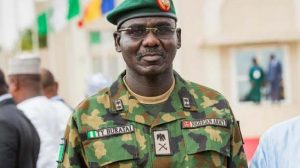 The Conference of Nigerian Civil Rights Activists, on Tuesday, demanded the immediate removal of the Chief of Army Staff, Lt.-Gen. Tukur Buratai, over his ownership of two properties in Dubai, the commercial nerve centre of the United Arab Emirates.

The CNCRA stated this in a statement by its Convener, Mr. Ifeanyi Odili, in Abuja.

It explained that the continued retention of Buratai in his position by President Muhammadu Buhari would rubbish the current anti-corruption crusade of the incumbent administration.

The group said Buhari should relieve the COAS of his position “as he is a square peg in a round hole.”

The statement stated, “The recent revelation of the procurement of properties in Dubai by the COAS as published by SaharaReporter on June 25, 2016, which was subsequently denied by the Army spokesman, is a dent on the integrity of the Buhari’s administration.

“The Buhari administration has been showcasing anti-graft posture and the massacre of hundreds of Nigerians in Zaria is in contrast to democratic ethos and norms.

“According to SaharaReporters, Nigeria’s Chief of Army Staff, Lt.-Gen. Tukur Buratai, and his two wives are joint owners of Dubai properties worth of $1.5m that was paid for in one transaction.

“The report indicated that the money for the purchase of the property might have come from a vehicle contract scam while Mr. Buratai was the Director of Procurement at the Army HQ.

“The allegation that General Buratai might have pilfered funds meant for the purchase of military vehicles has sparked outrage among soldiers and officers, especially those from the North-East of the country.”

The group asked Buhari to end indiscipline in the military through a process of ending impunity by its officers and men.

It said, “Discipline and preparedness of military officers and men should be a topmost priority in the system.  It must be strictly adhered to and the primary purpose of the Nigerian military, which is to defend the nation from external aggression.

“The realisation of this function primarily entails the preservation of the territory, people, culture and the national security as enshrined in Nigeria’s constitution of 1999.

“A democratic society requires a citizen army and the deviants; sadists and thugs within the armed forces should be identified, penalised and flushed out.”

The group asked the military authorities to promptly investigate complaints of rights violations instead of unnecessary denials in the face of facts.

It said, “It is therefore sad to note that Buratai, who is conversant with the above facts, negates the spirit of military profession and embarked on killing of harmless civilians in Zaria between December 12 and 14, 2015.

“Drawing from the above, the CNCRA called on the Federal Government to, as a matter of urgency, relieve Buratai of his position and commence full scale investigation into the killings as mentioned above.

“It is only if the Economic and Financial Crimes Commission looks into corruption allegation levelled against him (Buratai) that the Buhari administration would want to have us believe in his change mantra and war against corruption and indiscipline in Nigeria.”

Also, a Second Republic lawmaker, Dr. Junaid Mohammed, has challenged Buhari to make good his threat to deal with corrupt people around him.

Mohammed said this in a telephone interview with one of our correspondents on Tuesday.

He noted that in other climes, Buratai would have stepped aside.

Mohammed added, “I want to remind General Buhari of what he said when he returned from the anti-corruption summit in Britain; he said he was going to deal with those people who had houses in Dubai and Abuja.

“First, what he said did not make sense; it was illogical because you can be corrupt and not own houses in Dubai and Abuja.

“Now that his Chief of Army Staff has been found to have properties in Dubai and Abuja, what is he going to do with him? This is my direct challenge to General Buhari.

“General Buratai should step aside for proper investigations to be carried out because his remaining in office will jeopardise investigations, especially at a time the army he heads has come out to defend him.”

Meanwhile, Buratai has described those behind the report of the acquisition of two properties by his family in Dubai as defeated Boko Haram terrorists, who have migrated to the cyberspace to continue their war.

Buratai said the cyberterrorists would be defeated the same way their counterparts on land were defeated by the Nigerian Army under his leadership in the North-East.

The Army chief, who stated this while speaking in Abuja on Tuesday, added that the Army was already developing its cyberwarriors to counter the nefarious intents of the terrorists on the Internet and online media.

He said the Federal Government had already made clarifications on the issue of the properties in Dubai through a statement by the Minister of Defence, Mansur Dan-Ali, on Monday.

The Defence minister had said the report on the properties was an attempt by some persons to distract the leadership of the Armed Forces from the successful prosecution of the heightened campaign against terrorism in the North-East.

Buratai stated that the Army would not be distracted by the antics of those behind the report in its efforts to ensure national security.

He added that the allegation that refurbished equipment was procured in the fight against the insurgents was part of the campaign of calumny masterminded by the cyberterrorists.

He said, “We want to assure them that these terrorists, the Boko Haram terrorists, who have migrated to the cyberspace, we will follow them to that cyberspace, and equally defeat them and clear their doubts.

“We are meeting all the terrorists in the cyberspace. We have defeated them on the battleground. We are developing our own cyber-warriors and we will defeat them as we have done in the North-East.

“The issue of the refurbished equipment is still part of campaign of calumny. I refer you to the theatre commander. We are doing internal audit, they know my position. We will continue to do that.”

The Army Chief said recent compulsory retirement of 38 officers for alleged corruption and election related-issues from the service followed due process.