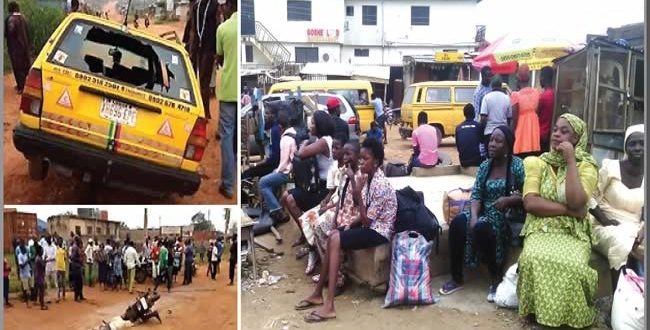 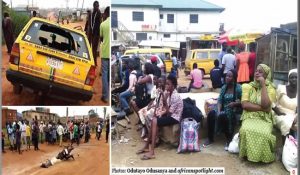 No fewer than 20 persons were reportedly killed after suspected militants invaded some villages in Imushin, a boundary community between Lagos and Ogun States.

A motorcyclist was said to have been beheaded by the militants, who reportedly started their operation from 10pm on Thursday till the early hours of Friday.

When our correspondent visited Imushin on Friday, he observed many residents fleeing the community.

All commercial activities were grounded in the villages as schools, churches and mosques were locked.

It was gathered that a total of 18 villages making up Imushin had been deserted.

Trouble started at about 10pm on Thursday when the gunmen opened fire on a group of vigilantes in Ola Imam. Seven of the men were said to have died on the spot.

A source within one of the communities, who spoke on condition of anonymity, said a large number of the victims were landlords.

Due to incessant armed robbery attacks in the community, landlords were said to have mobilised themselves, formed a vigilance group and had made bonfires at strategic points and were on foot patrol when the militants swooped on them.

A source said, “The militants came in through Elepete Phase 3 around 10pm on Thursday. They went to Ola Imam and Igbo Olomu where some vigilantes were keeping watch. They opened fire on them and killed seven of them at once.

“They marched to Oke Muti, Bolorunduro, Ajegunle, and fired at people. They killed about 25 people.”

A survivor of the attack, a taxi driver, said he had brought some goods for a customer when the incident happened.

He said, “I was just driving in without knowing what was happening. But at a point, I saw a motorcyclist on the ground in a pool of blood. He was dead. I thought he probably had an accident.

“I continued driving. Suddenly, I saw a group of men with guns. They opened fire on me and I quickly manoeuvred the car, but they followed me with gunshots.

“I drove down Imushin Road, until I got to a bush area. I jumped out of the car and ran into the bush. Still, they didn’t give up. They mounted two motorcycles to search for me. When they couldn’t find me, they shattered the rest of my windscreens.”

A  man, who had just arrived from his place of work in Ketu, was chased to his doorstep and also shot dead. The corpse of a well-dressed man was also said to have been found by a riverside in the area.

A resident, who spoke on condition of anonymity, said the militants spoke in Pidgin English.

He said, “They chased a trader and she fled and quickly hid herself in a container. They looked around and one of them tried to use torchlight to search for her. The woman escaped by a whisker.”

It was gathered that aside killing residents, the gunmen looted many shops in the community.

A source explained that the militants had vowed to kill 110 people for two of their men killed by officers of the Special Anti-Robbery Squad.

The source said, “The whole problem started after some SARS officers, who were acting on a tip-off, stormed a hotel in Elepete called Top-Catt Hotel.

“The officers killed two of the militants, carried away their corpses and arrested the female owner of the hotel. One of those killed was an engineer who worked for the militants. The militants are claiming he was unarmed and innocent and they asked the police to release the two corpses.

“When they couldn’t get the corpses, they decided that they would kill 110 people in revenge. They killed 15 people on that night and now, they have killed more people.”

A community leader said more than 500,000 people living in the area had fled, adding that life was difficult for those left behind.

“You will only find dogs and other animals in the houses. There is no food or water from Ita Oluwo to Igbo Olomu. I had to go very far to buy food,” he added.

Another community leader in the Ikorodu area of Lagos said some residents were stranded.

“There are many families that are afraid to enter their houses. They don’t know where to go.

“The police have been carrying corpses into the station and the death toll cannot be less than 50. We want the government to come and smoke out these militants,” he said.

Our correspondent observed heavy security presence in the Imushin area during a visit to the area on Friday.

Military officers attached to Mopol 20, policemen from the Lagos and Ogun States Police Commands were also on ground.

The Commissioner of Police, Lagos State, Fatai Owoseni, said security agencies in Lagos and Ogun were working to address the problem.

He said, “The militants used the cover of the night to operate and we are ready for them. We have directed a 24 hour surveillance around the area. We recovered six corpses from the scene.”

He added that investigations into the incident were ongoing.

He said, “The militants just came out and started shooting sporadically at people. Two people were killed in the process. We have reached out to stakeholders and government agencies to see what we can do because we cannot do it alone.”