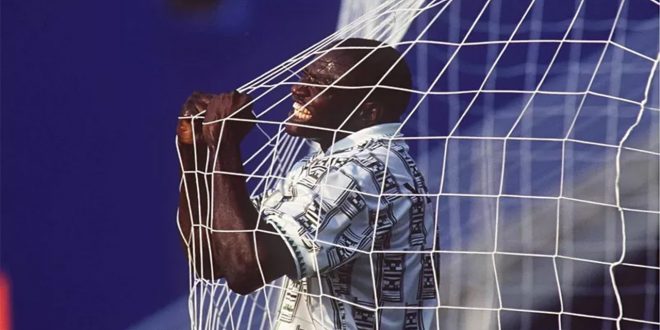 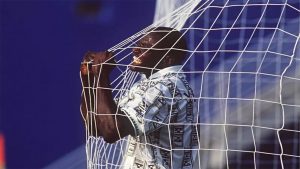 Deaths of Nigeria’s golden generation of footballers have rocked the country in recent times but one death that has left controversy behind it is that of ex-Super Eagles striker Rashidi Yekini, reports ’TANA AIYEJINA and SUCCESS NWOGU

After earning Nigeria a debut appearance at the World Cup and a first Africa Cup of Nations title away from home, the country’s golden generation of footballers, regarded as the Class of ’94, undoubtedly became heroes of the football-crazy compatriots.

However, years after, some members of the squad have given up the ghost, leaving the nation grieving in tears.

First it was Uche Okafor, who reportedly committed suicide in the US in 2011, then it was the country’s record goal scorer Rashidi Yekini, who was rumoured to be insane in Ibadan, Oyo State, before he died on May 4, 2012.

Former ASEC midfielder Thompson Oliha died from complications in 2013, goalkeeper Wilfred Agbonavbare died in 2015 after a battle with cancer, before captain of the side Stephen Keshi passed on in Benin City, Edo State, on June 7.

However, one death that has left controversy trailing it is that of Yekini. The demise of the ex-Vitoria Setubal striker four years ago has left Yekini’s lawyer, Jibril Olanrewaju, pitted in a war of words, accusations and counter-accusations, against the fallen footballer’s family, ever since.

Olanrewaju believes Yekini’s family had a hand in his death, after they forcefully abducted him in Ibadan few weeks before his death.

“I feel strongly so and nobody can change my opinion except God or there is an inquisition to his death and there’s something contrary to what I have. I will forever remain resolute in my conclusion. He (Yekini) told me in confidence that if they (family) succeeded in taking him away, that would be his end, and that’s exactly what happened,” Olanrewaju stated.

“I begged them to tell me where he was taken to so that these (Yekini’s) kids, who have been asking me, would know what happened to their dad. I didn’t get any clue until Rufiat (Yekini’s sister), who was among those that took him away, came about three months before she died. She apologised and said he was taken to some marabou; he was chained, he had his hair shaved and he was begging them to allow him have access to me, so that I could know what was going on.

“On the 4th (of May 2012) she said he was given a cup of tea and after taking two sips, he went to sleep. About 10 minutes later, he woke up violently and was gasping for breath. Eventually he was vomiting blood, they did everything to save him but when they couldn’t, they took him to Apete clinic. That was the only clue I had on how he died.”

But Yekin’s younger brother, Akeem, who lives with his mother in Ijagbo, Oyun Local Government Area of Kwara State, said the family was only trying to help Yekini before he gave up the ghost.

“Yekini’s wife in Osogbo told us that he was burning things inside his house in Ibadan. So, Mama went to see him but Yekini said he was fine. We were afraid that he might burn himself. So, Mama took him to an Alfa for treatment. It was from there he was rushed to the hospital, where he died,” the 30-year-old Akeem said.

Olanrewaju said Yekini had two property, one in Oni and Sons area of Ibadan, which comprises of twin five-room duplexes and a boys quarter of two rooms and two garages.

The other one, which he bought in 1994, is in Ijagbo, where the mother stays. It’s a two-storied building of four flats of three bedrooms each. There is also a boys quarter and a mosque he constructed for traders in that vicinity.

But the lawyer said the family is making it difficult for the late footballer’s kids to take possession of the property.

“Mama will attest to it that Yekini always said all his property will go to his children but we are finding it difficult because he didn’t write a will. Even at that, legally, since he has children, they naturally should take the property,” Olanrewaju added.

But Akeem said the family had never had anything to do with the property in Ibadan. Instead, he accused Olanrewaju and one of the wives of the late footballer of plotting to sell the property.

Akeem stated, “We never wanted to sell the house. Before my brother died, he said the house in Ibadan was for his children while the house at Ijagbo was for our mother. When we saw that nobody was living in our brother’s house in Ibadan, we decided that it should be repaired and rented out so that the children could make use of the money.

“It was the wife in London and the lawyer who wanted to sell the house but they were restrained by people, who told them to rent it out instead.”

Another controversy plaguing the former Africa Sports striker’s family is the number of children he left behind. While the lawyer says Yekini has two daughters, Yemisi and Omoyemi, the family insists its three.

It was learnt that Yekini had an affair with a Togolese lady, who gave birth to a girl, Suliat, about 11 years ago. However, Yekini denied the paternity of the baby but the family kept it. Suliat is staying with her mother in Ibadan.

Olanrewaju said, “When I confronted Yekini, he told me that he actually had a relationship with the lady but he said, ‘that was over a year ago and how could the lady come and say she is six months pregnant after leaving her for over a year?’

“On the eighth day of Fidau prayers for Yekini, the lady came with a little kid, a girl, and was trying to force the baby on me, that I should take it as it is. And I said if Yekini denied the paternity of the baby, it would be foolhardy of me to just take it like that. I advised them that they should go for a DNA test; that if it is positive, I would be legally harmless to do anything. So, for now, as far as I know, Yemisi and Omoyemi are the two children Yekini gave to me.”

But Akeem said, “Yekini admitted that he slept with the woman but denied that he is not the father of the child. The girl however looks like Yekini. The woman had a misunderstanding with him, so she came to stay with my mother, where she gave birth to the child. It’s my mother that is sponsoring the girl right now.”

Even though the lawyer insists that the woman is not suffering, since she is in charge of collecting rent of the house, it was evident that she was passing through hard times.

When one of our correspondents visited her house at Ijagbo, the building was in state of decay. Even though it was swept clean, the paintings as well as the worn out roofing sheets and dilapidated balconies and walls were begging for renewal.

“I spoke with Mama consistently up till February last year and she was accusing me and raining curses on me that each time she solicits for funds from the public, I used to block her and tell the world that she had enough to take care of herself.

“The rent (of the Ijagbo house) accrues to the mother and I don’t think anybody has taken a dime from it; even Yekini didn’t when he was alive,” Olanrewaju added.

However, Akeem said money from the rent was barely enough to take care of the old woman. He also accused the lawyer  of collecting money meant for the family of Yekini.

“The house here has four flats and a boy’s quarters but it’s  not as expensive as what you have in Lagos. We use the two flats up. My mother is the one who repairs the house and pays the bills,” Akeem said.

He added, “Since our brother died, the lawyer collects anything that is given to the family; they don’t give Mama anything. This year, someone came to give Mama N100,000 to do her business but the promise from the Kwara State Government to Mama has not been fulfilled. The governor said they will give the family N2.5m but we haven’t seen anything since then. Mama needs help, she is in a helpless condition.”

But the Kwara State Governor, Alhaji Abdulfatah Ahmed, through his Senior Special Assistant on Media and Communication, Dr. Muyideen Akorede, said it was untrue that  the government had not assisted Yekini’s family.

Akorode said when he died, the State Executive Council devoted part of a session to him, observed a minute silence for him and also agreed that a road, the former CBN Quarters road, leading from Agba Dam to Olaolu Hospital, in Ilorin, be named after him, which was done within two months  after his  demise.

He said, “When he died, the government reached out to the family immediately.  The Governor personally visited the family and also sent a government delegation to attend the Fidau prayers for the deceased.

Akorode claimed that Governor Ahmed was not informed  of Sikiratu’s hardship.

“It is coming to us for the first time to hear that Yekini’s mother is in such difficulty; I assure you that the state government will do something about it soon.”

He added that Ahmed’s wife, Omolewa, on hearing about Sikiratu’s predicament,  had sent a delegation to  assess her situation and determine the manner of help the old woman needed.  He added that money, textile and foodstuff were given to her.

“I don’t believe that Rashidi Yekini’s mother actually claimed abandonment by the state government. She would not say that,” he said.