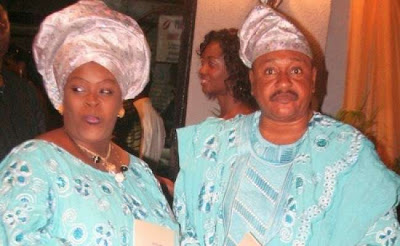 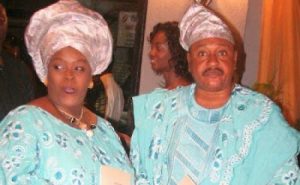 Yoruba actor and movie producer, Prince Jide Kosoko, has lost one of his wives, Henrietta Kosoko.

Henrietta, who was also an actress, was said to have died at the Sacred Heart Catholic Hospital, Lantoro, Abeokuta on Monday morning. She was 53-year old.

A source in the industry who pleaded anonymity said the actress developed complications after an automobile accident she had late last year, while travelling in her car.

The car reportedly suffered brakes failure and crashed, with Henriatta sustaining injuries in the head.

Since then, she was said to have  regularly been visiting the Sacred Heart Hospital for treatment.

Her condition was said to have deteriorated about a week ago when she was reportedly brought back to the hospital, where she eventually died on Monday.

But another report had it that she slumped and went into a coma on Monday morning and she was rushed down to the hospital, where she was confirmed dead.

Efforts made by one of our correspondents who visited the Emergency Unit of the hospital to get details of the incident did not yield any positive result.

The members of staff who spoke to him said she was not brought to the unit, as one of them explained that she might have been taken to a private ward.

Meanwhile, her remains was said to have been deposited in a morgue.

Although efforts to speak with Kosoko did not yield fruits, a Yoruba actor based in Abeokuta, Bolaji Amusan, popularly known as Baba Latin, confirmed Henrietta’s death but he did not give details.

When our correspondent called him on the telephone for confirmation, he said, “It is true.”

Head of the Ogun State Theatre Arts and Motion Pictures Producers Association of Nigeria, Dr. Samuel Adesanya, said he also heard about the death of Henrietta, but the details were sketchy.

Speaking in an emotion-laden tone, Adesanya said, “We heard today that she (Henrietta) died in Sacred Heart Hospital in Abeokuta. We also gathered that she was taken to the hospital a week ago.

“She had a terrible accident last year and she had been accessing treatment at the hospital. It is a very sad incident. We learnt her remains had been deposited in the mortuary.”

Adesanya described the late Delta-State born actress as an “excellent actress, well behaved and good wife, who displayed utmost dignity in everything she did.”

Kosoko had, in the past, lost two wives and he is now left with one, Bimbo.