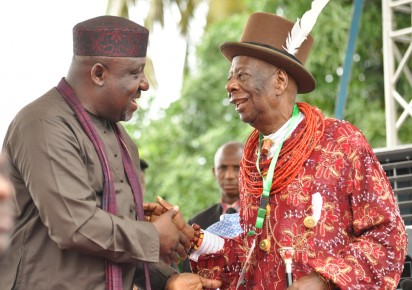 June 3, 2016 Comments Off on Jonathan Disappointed The People Of Ogoniland – Gininwa 16 Views 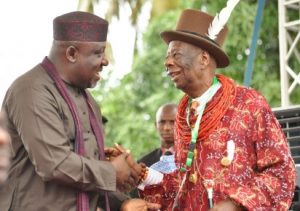 The former governor of Rivers State and the Minister of Transportation, Mr. Chibuike Amaechi, and the Chairman of the Supreme Council of Ogoni Traditional Rulers, King. Godwin Gininwa, have said that the former president of Nigeria, Mr. Goodluck Jonathan made a great mistake for failing to implement the United Nations Environmental Programme report on Ogoniland.

Amaechi and Gininwa made this statement on Thursday in Bodo City, Gokana Local Government Area of the state during the official flag-off of the cleanup of the area by President Muhammadu Buhari, in their separate speeches.

In his speech, Amaechi noted that he (Amaechi) did everything possible to ensure that Jonathan implements the UNEP report on Ogoniland, but regretted that his efforts yielded no fruit.

The transport minister said that the former president refused to carry out the project that would have benefitted the people of the state, adding that Jonathan was never a brother to the state. He added that the cleanup would bring a positive change to the economic life of the people of the area, stressing that the president had kept to his promise. “…we did everything possible to make our brother the former president to implement the report, but, he refused. “But with President Muhammadu Buhari, we are here today in keeping with our campaign promise.

Gininwa emphasized that Jonathan disappointed the people of Ogoni even after the people lead campaign of his election to monarchs in the Northern state. The Royal father called on politicians and Nigerian leaders to learn how to keep to the promises to the people. Gininwa also bemoaned that all his efforts and those of other Ogoni traditional rulers to make Jonathan to resolve environmental problem in the area were futile.

He asserted that the time of mourning for the Ogoni people and the Niger Delta was over, adding that flag-off was the beginning of happiness for the people of the area. “I want to plead with Nigerian leaders to keep to their promises. We campaigned for Goodluck Jonathan. During the campaign we met with traditional rulers in other parts of the country. Good enough we took over government.

“Personally, I have nothing against Jonathan because he is my son, but he made mistake for not implementing the report. He disappointed us. The time for mourning is over because Ogoni is now happy”. The monarch also pleaded with the FG to take up the construction of Bodo-Bonny road, adding that the road has for long been abandoned.