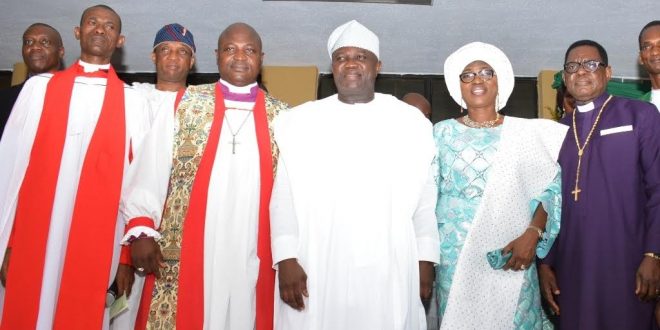 Democracy Day: My Governorship, An Assignment from God —Ambode

May 30, 2016 Comments Off on Democracy Day: My Governorship, An Assignment from God —Ambode 17 Views 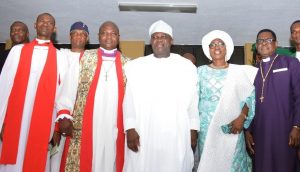 Governor Akinwunmi Ambode of Lagos State, yesterday said his ascension into office one year ago as the 14th governor of the state was an assignment from God, just as he vowed to continue to serve humanity selflessly throughout his tenure and lifetime.

Ambode, who spoke at a thanksgiving service held at the Chapel of Christ the Light, Alausa, Ikeja in commemoration of his first year anniversary, said his election despite many challenges, was a clear indication that God was involved right from the beginning and as such he would continue to draw strength and inspiration from the Almighty.

He said: “Exactly a year ago today, I stood before a larger congregation trying to commit myself to the opportunity that you gave me to serve you and I have tried as much as possible not to misplace that opportunity.

“I just want to thank everybody for believing in me. When I became a politician, I used to call myself a techno-politician, that is a technocrat and a politician. I never believed that I could ever survive up till this moment if not for the grace of God. “I believe so much that this is an assignment from God and that is why I am doing it with all my totality and give back to humanity.

God has been too kind to me and for that reason, I have decided that I will serve the people selflessly to the will of God,” the governor said. Ambode, who thanked all those that stood by him, specifically appreciated his mother, family and wife, Bolanle, who he described as a prayer warrior standing in the gap of prayer for him.

The governor also thanked the National Leader of All Progressives Congress (APC) and former Governor of the state, Asiwaju Bola Tinubu and the Oba of Lagos, HRM Oba Rilwan Akiolu for believing in him and supporting him.

He said: “I want to openly thank God for using them (Tinubu and Akiolu) and believing in me as well as supporting me and giving me to Lagos State.

I want to thank all our party members and leaders led by the State Chairman, Chief Henry Ajomale. As much I was new, I was the new face of Lagos and they supported me.” He also commended members of the state Executive Council, civil servants, religious leaders, the Judiciary and the Legislature, saying the three arms of government in the state had worked greatly together in the last one year, which was why the state is progressing.

Earlier, Ambode in his Democracy Day Broadcast Message to residents, which he titled, “Daring to Dream and Ready to Actualise”, said that despite the fact that the global economy is in turmoil and the Nigerian economy is facing huge challenges,

Lagos has continued to march on with confidence and a clear vision. Highlighting some of his plans for the next one year, Ambode disclosed that plans were on going to install a fibre optic network around the state to boost broadband access to homes and offices, improve the transportation system and continue the massive infrastructural development across the metropolis.