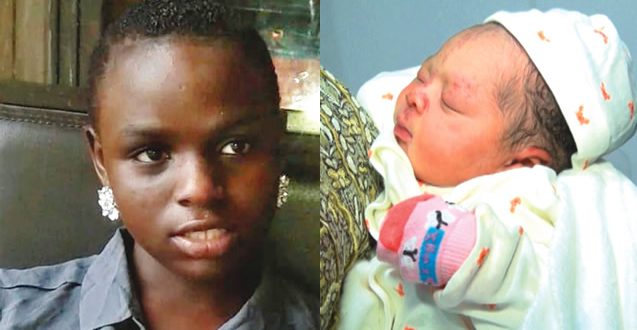 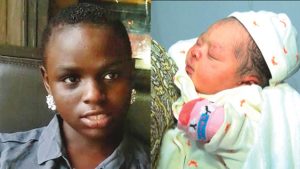 The rescued 14-year-old girl, Ese Oruru, was on Thursday morning delivered of a baby girl.

Ese was allegedly abducted in Bayelsa State in August 2015 and taken to Kano State where she was converted to Islam and married out without the consent of her parents.

Since her return to Yenagoa,  she has been living at the Police Officers’ Mess in Yenagoa, the Bayelsa State capital.

She was said to have gone into labour on Thursday morning and taken to the Bayelsa State Government House Clinic where she was delivered of a baby girl.

Charles said his daughter was delivered of the baby about 10.15am on Thursday.

He said the young girl, who was in Junior Secondary School at the time she was taken away, was in a good state after going through the early morning labour stress.

“Ese and her daughter are hale and hearty. She gave birth to a baby girl at the Government House Clinic, Yenagoa. I just came back from the hospital,” Charles said.

Charles said that the family members were excited about the latest addition to the family, despite the circumstances surrounding her pregnancy.

He added that the baby and the mother were doing well, saying that the young girl gave birth without any complication.

‘’ Yes, my daughter gave birth around 10.15am. The mother and the child are well. She gave birth to herself (a baby girl). We are very happy that she gave birth safely,” he said.

Ese was allegedly abducted in Bayelsa State last August and taken to Kano where she was converted to lslam and married off without the consent of her parents.

Since she returned to Yenagoa following a public outcry and pressure mounted by the media, she has been living at the Police Officers’ Mess in Yenagoa in custody of the police authorities in the state.

Dahiru has been in prison custody because he was unable to fulfil the bail conditions slammed on him by the court headed by Justice Ajiya Nganjiwa.

Before Thursday’s incident, Ese was expected to give evidence in secret when the hearing of the case will come up on June 2.