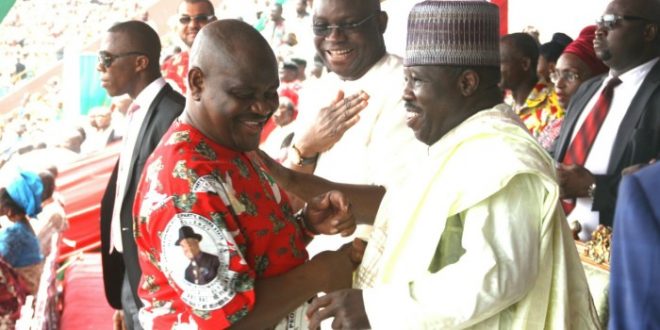 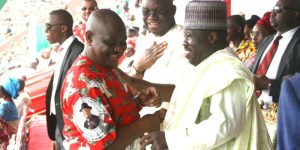 Governor Nyesom Wike of Rivers State, yesterday, justified last Saturday’s removal of Senator Ali Modu Sheriff as national chairman of Peoples Democratic Party, PDP, at the Port Harcourt convention, saying the party under the erstwhile leadership was headed towards the precipice. Wike’s justification of Sheriff’s sack was welcomed by Prof. Jerry Gana, leader of the PDP

Concerned Stakeholders, who convened a parallel convention in Abuja to press for the removal of the Sheriff-led executive of the party.

Meanwhile, heavily armed policemen, yesterday, took over the national secretariat of the party, denying entry and exit to and from the building. The development, which came ahead of today’s expected takeover of the national secretariat by the Senator Ahmed Makarfi-led caretaker committee, was also shadowed by continuing intrigues as the ousted Senator Sheriff executive was last night also said to be preparing to fight back.

Sheriff and his aides, who could not be reached for most of yesterday, were said to be engaged in a meeting with his dissolved National Working Committee, NWC. Speaking after the 2016 national convention, Wike said: “All along, the crisis has been about the former acting chairman whose emergence was strongly opposed.

This is destabilising the party and so we had to let him go. What is important is the party and not the individual. No sacrifice is too much for anyone to make as far as PDP is concerned.” He noted that he had no personal interest in supporting Senator Modu Sheriff as he was the best option at the time he emerged.

He said PDP will continue to grow from strength to strength as it remained the only hope for the country. Governor Wike said: “We will not allow the PDP to die or suffer divisions under our watch. History  will never forgive us if we watch the party die.” The governor said the party leaders would work towards maintaining unity among all members of the party.

He said despite the challenges, the 2016 national convention was successful as the party had been repositioned in the interest of the nation. Police block entry into secretariat Last night, five police vehicles, comprising two trucks and two pick up vans, blocked access on both ends of the street in front of the secretariat in the Wuse Zone 6 Area of Abuja.

The vehicles conveyed a detachment of policemen, who took positions and blocked the entry into the secretariat. The two sides of Dalaba Street, leading to the front and back gates of the secretariat, were barricaded by stern-looking security operatives brandishing weapons. Findings showed that men of the Nigeria Police, Nigeria Security and Civil Defence Corps, NSCDC, and private security guards manning the secretariat had been replaced with new ones.

A source, who spoke on condition of anonymity, said, yesterday, that the security men might have been deployed to forestall any vandalism of the party’s property. Mr. Temitope Kolawole, a Deputy Superintendent of Police, who was the most senior office in the team, refused to give reasons for the cordoning off of the secretariat, yesterday, as he told reporters who approached him that only the Police Public Relations Officer could speak on the development.

Meanwhile, Secretary of the Caretaker Committee of the party, Senator Ben Obi, has said the committee would take over the secretariat of the party today. In an exclusive interview with Vanguard, Senator Obi acknowledged that he had been informed about the police presence at the secretariat but declined to speak further, pointing out that he did not have the facts of the matter.

He said the chairman of the caretaker committee and his team would formally assume office today at the party secretariat. Meantime, Sheriff and some of his loyalists in the just dissolved NWC were said to be locked in a meeting yesterday night. Repeated efforts to reach them and their aides were unsuccessful as the phone calls were either not answered or their phones were switched off.