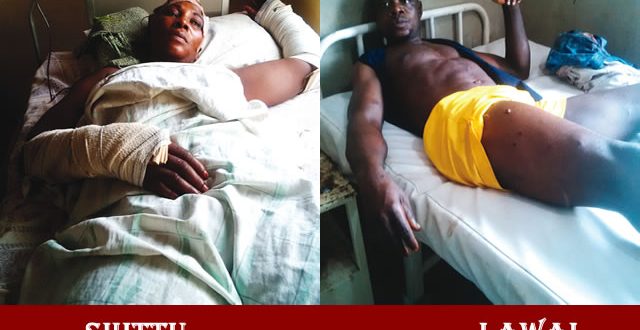 May 22, 2016 Comments Off on Residents Flee As Herdsmen Invade Ekiti, Kill two 38 Views 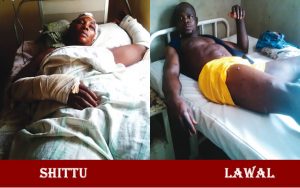 The assailants, numbering about 20, stormed the sleeping town around 8 p.m and unleashed terror on the residents.

After the onslaught, one person died instantly, while four others that sustained gunshots and machete wounds were taken to the hospital in a police vehicle.

Ibiteye, whom an eye witness said, had his stomach ripped open by a bullet, later died in the hospital on Saturday.

He was writhing in pains when our correspondent visited him earlier in a private hospital in Ikole-Ekiti.

Shittu, a trader, said the assailants collected N45,000 from her and also carted away recharge cards and stocks from her store.

“I am happy I didn’t die from the attack. They wanted to attack my children and others with me. It was while covering them that I received machete cuts. They were shouting, ‘Madam bring me money. Madam bring me money.’ I thank God they didn’t shoot me.”

Lawal said the youths were still discussing a report of possible attacks from the Fulani herdsmen when they invaded the town.

“We had gathered to discuss the issue. We agreed to pray to God to avert the crisis because one cannot predict the outcome of a war.  Look at the havoc they have wrecked on our town now when all we wanted is peace.”

Abejide could not talk when our correspondent saw him. He was turning about in his hospital bed.

A source said a bullet pellet was still lodged in his skull.

It was gathered that Arosanyin had earlier been attacked by the herdsmen about two years ago.

“They inflicted machete cuts on him. The men were arrested and they later paid N150,000 compensation to him. He must have been their prime target,” a resident said.

Residents blamed the attack on the laxity of the police and their refusal to act on intelligence report.

Ekiti State Deputy Governor, Dr. Kolapo Olusola, who visited the town in company with the Commissioner of Police, Etop James, on Saturday, said the state government would take all necessary steps to avoid reoccurrence.

“We won’t allow strangers to destroy our lives and properties at will. This is a sad development that we must tackle to ensure justice and peace reign in the state.”

Olusola during a condolence visit to the Arosanyin’s family prayed to God to console the family.

“It is only God that can console you, there is little a man can do.”

A resident, Mrs Grace Olofin, told reporters that the herdsmen stormed the town brandishing weapons like guns, bows, arrows, sword, machetes and hacked down the victim in the ensued melee.

Another witness, who narrowly escaped being killed, Adebayo Ajayi, described the incident as a reprisal as he said that the herdsmen had previously fallen out with the villagers over their grazing activities in the community.

When our correspondent visited the town, the people were seen clustering in small groups and discussing the attack.

Our correspondent also observed many of the residents packing their belongings and fleeing the town.

The Ekiti Police Public Relations Officer, Alberto Adeyemi, at the scene told our correspondent that evidence had been gathered to assist the police in their investigation.

He said the law enforcement agency quickly mobilised its men to the town on getting the report and had restored normalcy in the town.

“As soon as we got the report, we mobilised our men and the Area Commander led the rescue operation to the place.

“We have restored normalcy and our men are stationed on ground,” he said.

There were five army vehicles and 10 police vehicles patrolling the town on Saturday.

The soldiers led by Major A. Y. Tukra were also combing the forest with the help of the locals on Saturday.

The Regent of the town, Tinuade Adebayo, said the invaders operated for about one hour before escaping through the bush.

“We had signs of possible attack and informed the police. The police did not act on it. When the attack was on, I called a number given to me by the police but it didn’t go through.

“I later called the Divisional Police Officer but he claimed he did not understand my message. Police did not arrive until about two hours after the Fulani herdsmen had left.”

The councillor for Ipaoa-Oke Ako-Irele ward, Mr. Segun Kehinde, said the problem was reoccurring one.

“Around January, the Fulani herdsmen sent a message to us that they were coming to attack us. I informed the chairman who sent a signal to the police. The police came then but the Fulani herdsmen did not show up. We thought the whole thing had ended then.

“On Friday they took us by surprise and started the attack from the centre of the town where youths usually gathered. They shot sporadically and had a field day because our vigilante group were not out by them.”

When asked how he knew that the criminals were Fulani herdsmen, he said, “Some people that hid in the bush saw their faces. They were also communicating in their language. Besides, they had already sent a message to us that they are coming to attack us.

“Last week, six Fulani men that were overheard planning to attack us were handed over to the police, but they were released on Thursday by the police. And the attack took place on Friday. We also recovered the caps of the attackers.”

A resident, Victor Mebusaye, said the Nigerian Army was contacted when the police failed to arrive in time.

However, the police spokesperson said all the allegations made by the people would be investigated.

“We will investigate all the claims of the people to establish the truth. We are to serve the people and we will be willing to ensure protection of lives and properties always.”

Our correspondent observed that there was no police post in all the town except at the local government headquarters in Ikole which was about 35 minutes drive because of the bad road.

A resident who spoke on condition of anonymity said, “the police post in the town was removed five years ago when a policeman was killed by the Fulani herdsmen during a confrontation. Since then, we have been left to our fate.

“This is a bad development. People are leaving the town in droves. Some are even packing their belongings because of the fear that they could stage more ferocious attacks.

“We have been co-habiting peacefully with Fulani herdsmen for long. We didn’t know when things went awry. The security agencies must rise to the occasion. This is a serious threat to Ekiti,” he said.