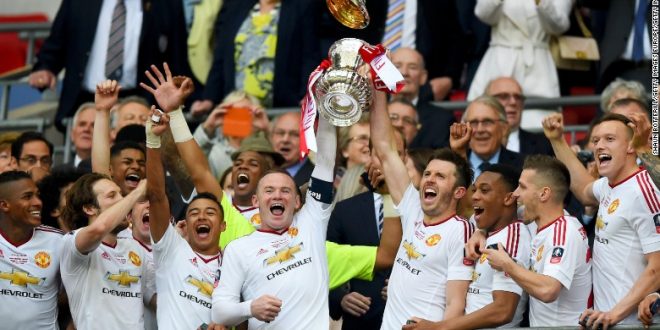 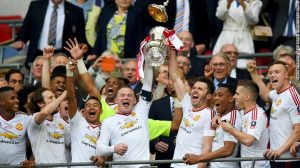 Manchester United came from behind and survived Chris Smalling’s sending-off to beat Crystal Palace and win the FA Cup at Wembley through Jesse Lingard’s extra-time strike.

As Wembley was awash with growing speculation this this would be Louis van Gaal’s final match as United manager – with BBC Sport understanding he will be replaced by Jose Mourinho next week – he was able to add English football’s most glamorous cup to his honours list.

United looked on course to end the season empty-handed as well as missing out on Champions League football when substitute Jason Puncheon’s powerful far-post finish put Palace ahead with 12 minutes left.

It was harsh on United, who had hit the woodwork through Marouane Fellaini and Antony Martial, but they responded within four minutes with a brilliant run from Wayne Rooney that ended with Juan Mata scoring from close range.

United lost Smalling to a second yellow card for hauling back Yannick Bolasie in extra time – but Lingard took the trophy to Old Trafford when he lashed home a first-time strike from Damien Delaney’s half-clearance after 110 minutes.

Meanwhile, the club will make an announcement early next week to appoint Jose Mourinho as thier new manager. It is believed a deal with the 53-year-old Portuguese was agreed in principle before United’s FA Cup final win against Crystal Palace on Saturday.

With United failing to qualify for the Champions League under Louis van Gaal, the Old Trafford hierarchy is thought to have decided a change is required.

Mourinho has been out of work since he was sacked by Chelsea in December. The club  plan to announce his arrival early next week after telling Van Gaal, 64, his reign has come to an end.

Share
Previous Buhari And The Need For A Complete Team
Next NLC Suspends Strike, To Resume Talks With FG