May 20, 2016 Comments Off on Ronke SHonde’s Murder: Husband Charged For Murder 11 Views 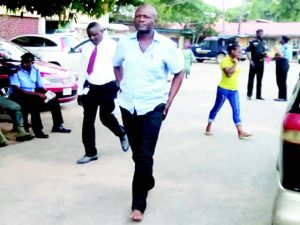 According to the  Police Public Relations Officer, Dolapo Badmos,  t the suspect would be arraigned in court on Friday 20th May  for allegedly killing his wife, Ronke.

However, the remains of the late Ronke would soon be buried. It was gathered that the corpse had been released to her family by the police after the conclusion of autopsy on Wednesday.

It was learnt that the family members had fixed Friday for the burial, but could change their mind. This is just as a member of the family said they were not excited about Lekan’s arraignment.

The source, who did not want to be identified because the family did not want any further report on the matter, said the victim’s mother had insisted that she had forgiven 51-year-old Lekan.

Lekan was said to have fled the house, and in a telephone interview with our correspondent while in hiding, he had denied killing his wife of eight years.

He said the victim was the one who cheated on him with the general manager of her company, Kayode Oluokun.

Oluokun, had however shunned attempts by our correspondent to hear his side of the story, saying he needed time.

However on Wednesday, pathologists at the Lagos State University Teaching Hospital released a report which stated that Ronke died from respiratory seizure.

She was also said to have had water in her brain and some bruises on the head.

A source said, “The family has decided to bury her quietly and it appears to be a family arrangement together with some family friends.”

A member of the family expressed sadness over the handling of the matter.

He said, “If you knew Ronke before she died, you would know she didn’t deserve to die like this. She was a vibrant and energetic woman. She and her late brother, Jide, were the most outspoken in the family and if this had happened to any other person while they lived, this matter would have gone farther than this.”

A human rights activist and President, Women Arise for Change Initiative, Dr Joe Okei- Odumakin, said the group had only  read media reports on the cause of Ronke’s death.

“The accounts have not been that clear enough. The police will do well to make it comprehensible for the public. We want the police to do a thorough investigation to make sure the innocent is not made to suffer unjustly and the guilty does not go unpunished,” she said.

The police spokesperson, Badmos, said the autopsy had shown that Lekan had a case to answer, adding that he would be arraigned for murder on Friday.

She said, “The autopsy has revealed that Mr. Lekan Shonde, the alleged killer of his wife, has a case to answer.

“Therefore, he will be charged to court tomorrow (Friday) to answer to the charge of murder.”