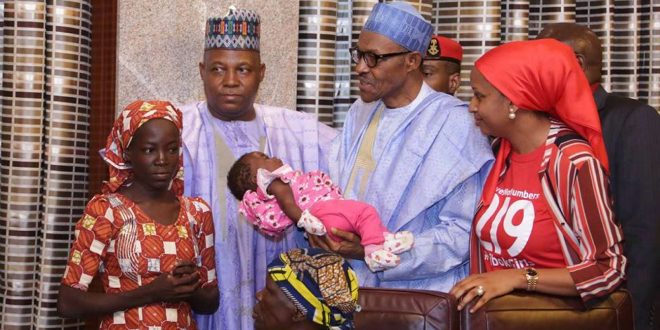 May 20, 2016 Comments Off on Another Chibok girl Rescued, Amina visits Buhari, President Promises To Rescue Others 64 Views 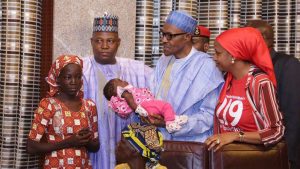 TWO days after the rescue of one of the 200 schoolgirls abducted from the Chibok community in Borno State, another schoolgirl was rescued on Thursday night.

Army authorities, who broke the news of the second rescued schoolgirl, said more details about the operation would be provided later.

The Acting Director, Army Public Relations, Colonel Sani Usman, who confirmed the rescue, said he was working on the details, which would be released later, adding that the girl’s identity was not immediately known.

President Muhammadu Buhari had earlier on Thursday said the rescue of Amina Ali, one of the over 200 girls kidnapped in their school in Chibok, Borno State, on April 14, 2014, had rekindled his hope that the remaining girls would be rescued alive.

He assured Nigerians and other stakeholders that his administration would do everything possible to rescue the girls from the captivity of Boko Haram.

Buhari spoke when he received the rescued girl at the Presidential Villa, Abuja.

The girl was led to the President’s office by the Borno State Governor, Kashim Shettima; the Minister of Defence, Mansur Dan Ali; the National Security Adviser, Babangana Monguno; and the Chief of Defence Staff, Gabriel Olonishakin, among other top government officials amidst tight security.

“Rest assured that this administration will continue to do what it can to rescue the Chibok girls who are still in Boko Haram’s captivity. Amina’s rescue gives us new hope and offers a unique opportunity to vital information,” the President told his guests.

Buhari said like all Nigerians and many others all over the world, he was delighted that Amina had regained her freedom.

He however said his feelings were tinged with deep sadness at the horrors the girl had had to go through at such an early stage of her life.

The President said although nothing could be done to reverse the horrors of her past, the Federal Government would do everything possible to ensure that the rest of her life took  a completely different turn.

While saying that nobody in Nigeria should be put through the brutality of forced marriage, the President said every girl had a right to education and their choice of life.

Buhari said, “Amina will get the best care that the Nigerian government can afford. We will ensure that she gets the best medical, emotional and whatever care that she requires to get full recovery and be integrated back into the society.

“Yesterday (Wednesday), medical personnel from government and other NGOs examined her for about five hours. Trauma experts from UNICEF also met her.

“The Federal Government will assist the Murtala Mohammed Foundation which has already been providing support for the families of the missing Chibok girls and which runs a trauma and counseling facility in Kano; we  will also be involved in the ongoing work with Amina in monitoring her progress and any additional support she requires.

“The continuation of Amina’s education so abruptly disrupted will definitely be taken over by the Federal Government.

“Amina must be able go back to school. Nobody in Nigeria should be put through the brutality of forced marriage; every girl has a right to education and their choice of life.”

Earlier, the Minister of Defence attributed the return of the Chibok girl to what he called Buhari’s political commitment and support which he said had given a major boost to the success of the fight against terrorism.

Briefing the President of the military operation in Sambisa Forest, Ali regretted that the nation lost seven soldiers in 22 days.

He added that about 69 persons had been killed in the operation.

Shettima also commended the President, saying his doggedness had restored peace to the North-East.

Meanwhile, the Chibok Community in Abuja popularly called KADA on Thursday said they would not accept Mohammad Hayyatu as the husband of their daughter, Amina Ali Darsha Nkeki from Mbalala.