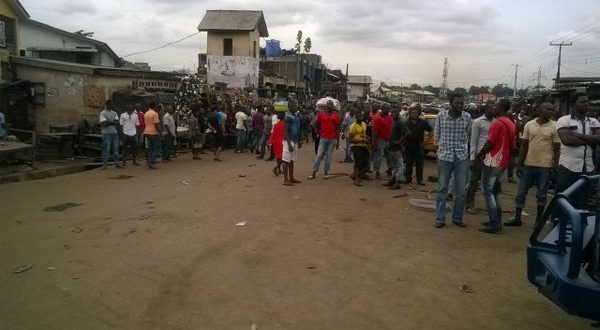 May 18, 2016 Comments Off on Turf War In Ladipo Market Leaves One Dead, 40 Vehicles Destroyed 11 Views 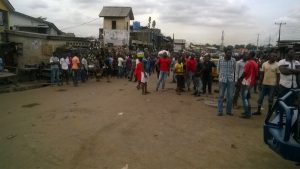 Hoodlums, who were collecting land fees, on Tuesday invaded Oloruntoyin Street in Ladipo Spare Parts Market in the Mushin area of Lagos State, and engaged the traders in a fight during which one person was killed, while several others were injured.

The hoodlums, who came at about 10am, smashed bottles on the road and attacked the traders with cutlasses.  it was alleged that  the suspected hoodlums  were in the market to collect the land fees and the traders resisted them, leading to pandemonium during which the windscreens of about 40 vehicles were smashed.

It was learnt that when policemen attached to the Rapid Response Squad and Dalemo division arrived at the market, gunshots rent the air as the hoodlums engaged them in a shootout.

Our correspondent gathered that a man, identified only asAlaye, who reportedly led the hoodlums, was shot dead, while others were injured and had been rushed to a hospital.

One of the traders, who identified himself simply as Godwin, said despite the rainfall on Tuesday, the hoodlums laid siege to the market.

He said, “It was around 10am that we saw the hoodlums. They were Yoruba thugs. They came with knives, cutlasses and rifles. I was going to my shop to move some goods out when the trouble started.

“They were all over Oloruntoyin Street, attacking traders with weapons. Everyone ran away during the mayhem. What caused the riot was that the hoodlums wanted to collect money from traders, but they were resisted.

“When the police later arrived in about four vans, the hoodlums brought out pump-action rifles and began shooting at the police. Someone was shot dead among the hoodlums.”

A source in the RRS told our correspondent that the police counted over 40 damaged vehicles in the market, and assisted to rush injured people to a hospital.

He said, “The fight had started around 10am, but the shootout started around 2pm when the hoodlums sighted policemen. The cause of the fight was underlined by ethnicity. Yoruba fee collectors came to the part where Igbo traders were, but the latter resisted.

“About 40 damaged vehicles are at the scene. Many people were injured and have been rushed to the hospital. The police are still at the scene.”

Another trader, who spoke on condition of anonymity, said the hoodlums also burnt some shops.

He said, “There is tension everywhere. Some hoodlums led by Alaye were here with matchets and guns f ighting Igbo traders. We ran away for our lives. Some shops were burnt. Alaye was shot dead during a shootout.”

The Police Public Relations Officer, SP Dolapo Badmos, said the Commissioner of Police, Fatai Owoseni, had ordered investigation into the fracas, adding that normalcy had been restored.

She said, “The fracas started between two people fighting over food. Four men were injured and rushed to a hospital. The Area D Command and RRS operatives have restored normalcy to the area. No death was recorded. The CP has ordered a full-scale investigation into the matter.”