NLC Walks Out of Meeting with FG, Begins Strike 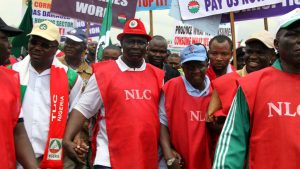 The leadership of the Nigeria Labour Congress on Tuesday walked out of the meeting held with the representatives of the Federal Government, vowing to go ahead with its scheduled nationwide strike on Wednesday (today).

Representatives of the Trade Union Congress, who also attended the meeting, however, said the TUC would not join the strike.

NLC President, Aliyu Wabba, led the labour delegation while the Secretary to the Government of the Federation, Mr. Babachir Lawal, led the Federal Government delegation at the talks held in the SGF’s office in Abuja on Tuesday night.

“It the duty of government to provide security for her citizens and anyone who tries to coerce any worker to do their bidding would be made to face the law of the land. We had full cooperation with the Trade Union Congress of Nigeria and they said they are not going on strike. For them, it is a complete return to work tomorrow (Wednesday). It is not the same with the NLC however. They have two factions, one agreed completely with the position of the TUC.”

Briefing journalists, Wabba said his team arrived at its decision to proceed on strike following the inability of the Federal Government to meet up with its demand to revert to the N86.50K old pump price of fuel.

Officials of NLC, who pleaded not to be named, said they were angered by the decision of the Federal Government to proceed to court, despite existing negotiation which was at the instance of the government.

The action of the NLC followed the failure of the parties to resolve the dispute over the increase of the pump price of petroleum by the Federal Government from N86.50 to N145 per litre.

But the Federal Government has threatened to apply the ‘no-work-no-pay’ rule against workers who join the NLC strike.

The SGF, Babachir Lawal, in a statement on Tuesday, directed all ministers, permanent secretaries and heads of government agencies to invoke the provision of rule against errant workers.

Lawal advised civil servants to shun the exercise in their own interest, which, he said, was called by the NLC despite a ruling of the National Industrial Court, which restrained labour from going on strike on Wednesday.

The SGF added, “This notice is regrettably given in spite of an order by the industrial court against the strike.  Government, therefore, calls upon and advises all workers to respect the laws of the land and to desist from participating in an illegal action.

“Government undertakes to guarantee the safety of workers and their workplaces, and expects that normal work will continue in the interest of the nation.  Accordingly, security agencies have been directed to ensure unimpeded access to offices, workplaces and markets.

“Accordingly, all ministers, permanent secretaries and heads of government agencies are hereby directed to invoke the provision of ‘no work no pay’ in respect of any staff member who absents himself or herself from work to join the strike.”

“Attendance registers are required to be opened in all Ministries, Departments and Agencies.”

There were indications on Tuesday that organised labour would defy the ruling of the National Industrial Court on the strike called to protest the fuel price increase.

While the Nigeria Labour Congress said it was not aware of the court order stopping the strike, the Trade Union Congress flayed the Federal Government for obtaining it.

The  President of the TUC, Mr. Bala Kaigama, in an interview with The PUNCH, described the action of the Federal Government in heading for the National Industrial Court as panicky.

“That is what we are going to the meeting to find out. Who instituted that? So, we would find out if it is going to stop our negotiations. They are doing it through panic.  I think they are scared.

“We have not been served. Can you talk of what you have not seen?” he asked.

The NIC had, in its ruling on Tuesday, stopped the TUC and the NLC from embarking on their planned strike scheduled to start on Wednesday.

But earlier on Tuesday, the NLC held an emergency National Executive Council meeting in Abuja, where it decided to go ahead with the strike.

At the meeting, the congress insisted that the Federal Government must reverse the increase in the pump price of fuel from N86 and N86.50k to N145.

It was also learnt that the NLC might dump the TUC in carrying out the strike.

A top official of the congress told one of our correspondents that the NLC was embittered by what it described as the “lukewarm posture” of the TUC in enforcing the joint decision of the two labour centres.

It was gathered that the NLC leaders were angered by the presentation of the TUC President, Bobo Kaigama, who they said talked about minimum wage and other palliatives contrary to the position of the two centres to prevail of the government to reverse the increase.

The source added, “Look, the TUC has backed out of the protest. The government has succeeded in using the TUC and the other faction to divide labour.

“Didn’t you see how the President of the TUC spoke during the meeting with the government team? He did not dwell on our mission, he went there to talk about palliatives and the General Secretary of the NLC challenged him there.”

But Kaigama said it was not true that the TUC had backed out of the planned action.

In an interview with one of our correspondents, he said it would not be proper to talk of backing out when there were ongoing talks with the government.

Also, the factional President of the NLC, Mr. Joe Ajaero, advocated sustained negotiations with the government, saying the N145 increase would inflict a lot of hardship on the citizenry.

“We have not gone into negotiation, they briefed us and we responded. That is not negotiation.

‘‘We have made our positions known to them but they have equally lined up what they called palliatives, including N500bn provision for social investment. They have equally agreed to reconstitute the board of the PPPRA, and then minimum wage,” Ajaero stated.

Meanwhile, Ajaero, on Tuesday, said he had received invitation from the Department of State Services.

The labour leader said though, he did not know why he was summoned, he would appear at the DSS office before going for the meeting with the Federal Government at the Office of the Secretary to the Government of the Federation.

Earlier on Tuesday, the NIC stopped the NLC and the TUC from embarking on their planned strike over the increase in fuel price by the Federal Government.

Justice Babatunde Adejumo gave the restraining order after the Attorney General of the Federation and Minister of Justice, Mr. Abubakar Malami, argued an ex parte application in which the prayer for the order was contained.

Justice Adejumo ruled, “The defendants are hereby restrained from carrying out the threat contained in their communique issued on May 14, 2016 pending the hearing and determination of the motion on notice filed on May 16.

“It is the order of this court that the status quo be maintained as of May 17.”

The order, being an interim one will last for seven days, although it is subject to renewal.

The judge also ordered that the processes in the case be served on the respondents within 24 hours and that proof of service be filed in the court.

The judge transferred the hearing of the substantive case to another judge of the court on the grounds that he would be engaged at the National Judicial Council when the matter would be deemed for hearing.

He also said that he granted the order to make sure that people were not subjected to avoidable hardship.

He said, “I decided to take this case this morning because it is on an issue that will affect everybody. I don’t want people to be subjected to hardship. There will be scarcity of foods, people may die, students will engage in all sorts of activities. This is why I have to grant this order.”

Malami, while moving the ex parte application, said it was in the national interest to stop the NLC from shutting down the nation over last week’s increase in the price of fuel.

But the Conference of Nigeria Political Parties condemned what it called the hurried judgment secured by the Federal Government to stop the mass action against fuel price increase.

The organisation therefore called on the masses to ignore the court judgment and continue with the protest.

The CNPP, in a statement on Tuesday, by its national Chairman, Alhaji Balarabe Musa, and Secretary-General, Chief Willy Ezugwu, also accused both the Federal Government and the labour unions of insincerity on the matter.

The CNPP said, “We reiterate our call on all well-meaning Nigerians and civil society to ignore the labour unions and protest against the unjustifiable pump price increment in their numbers.”

Despite the court order, however, a meeting between a committee of the House of Representatives and the Ayuba Wabba-led NLC on the fuel price increase ended in a deadlock on Tuesday evening.

The committee, which was chaired by the Chief Whip of the House, Mr. Alhassan Ado-Doguwa, met with the leaders behind closed doors for about 35 minutes at the National Assembly.

Findings showed that the union leaders listened to the appeals of the lawmakers but said the issue was beyond them.

“They merely assured the committee that they would report to the enlarged meeting of the union to decide the way forward,” a committee source told The PUNCH at about 7.30pm.

Ado-Doguwa confirmed that they met with the leaders but that they did not make a precise commitment to shelve the strike.

The Chief Whip added, “Not precisely, but they have given us favourable listening ears and have promised to convey our plea to their constituents to get their mandate on any possible re-consideration.’’