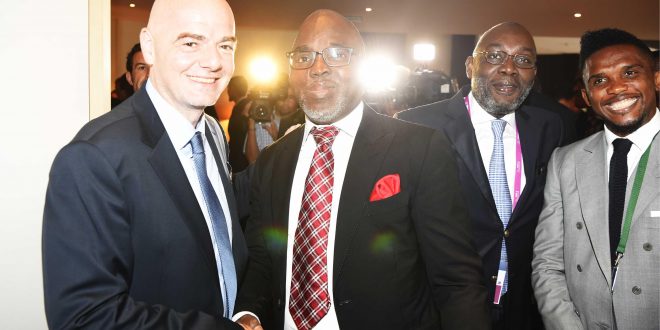 May 15, 2016 Comments Off on FIFA President, Infantino, to visit Nigeria 12 Views 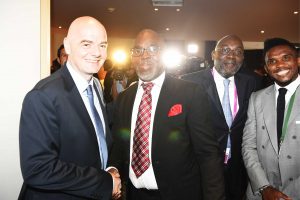 Following robust and illuminating sessions with the leadership of the Nigeria Football Federation at the 66th FIFA Congress in Mexico City, the president of football’s world governing body, Gianni Infantino, has promised to visit Nigeria in a few weeks.

NFF President Amaju Pinnick told thenff.com at the weekend that during the visit, which date will be communicated in a number of days, the world’s number one football administrator will pay a courtesy call on His Excellency, President Muhammadu Buhari (GCFR), attend the finals of the NFF/ZENITH Bank Future Eagles Championship, have an evening with Corporate Nigeria and also have an interactive session with a horde of African FA Presidents who will also be in Nigeria to receive him.

Pinnick said: “The FIFA President says Nigeria is a big country and a massive footballing nation that should help with the new FIFA leadership’s drive to truly develop the game. He is excited about our various capacity –building and youth development programs and that is why he is coming to watch the NFF/ZENITH Bank Championship finals.

“He sees a lot of potentials and dynamism in the current NFF leadership and says he would love to work with the NFF for the general development of the game.”

Infantino took office at the head of world football after winning election at an extraordinary general congress in Zurich on 26th February 2016. The 46 year –old Italian’s motto is “bringing football back to FIFA and FIFA back to football.”

At the recently –ended FIFA Congress in Mexico City, the world body appointed Senegalese Fatma Samba Diouf Samoura, 54, as its first –ever woman Secretary General. The multi –lingual Samoura, who spent 21 years working for the United Nations, will take office next month.