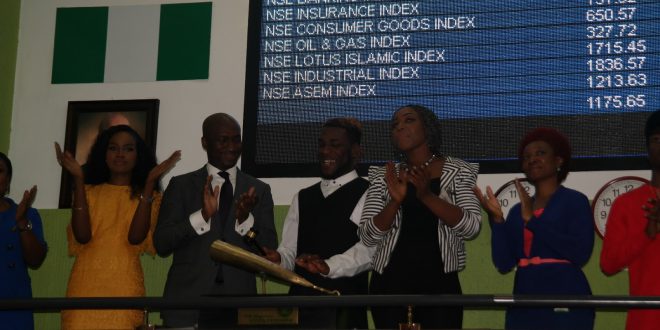 May 13, 2016 Comments Off on Burna Boy Rings Closing Bell At Nigerian Stock Exchange, To Participate In 5km Race Against Cancer 24 Views 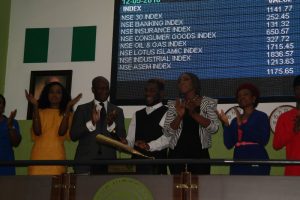 Nigerian music superstar Burna boy had the special honour of ringing the closing bell at the Nigerian Stock Exchange (NSE) on Thursday, 12 May, 2016 signifying the close of trade for the day. He attended the symbolic market closing ceremony,  in the company of his mother and manager, Bose Ogulu, and his sister, Ronami Ogulu.

Burna also had a media chat with CNBC Africa, which was broadcast live in forty-eight countries, as well as Channels Television. He met with investment advisers, fans at NSE, brokers and more during the ceremony.

The invitation from the NSE meant that Burna Boy joined an elite short list of Nigerian musicians to have had the unique honour – usually reserved for CEOs of quoted companies or very influential local and international figures such as himself.

As the race ambassador for the 2016 NSE Corporate Challenge, Burna will also join in the fun-filled 5-kilometre walk, run and jog competition designed to raise awareness and funds for the purchase of 37 Mobile Cancer Centers (MCCs). The challenge, tagged “eRace Cancer”, will be held on Saturday, May 14, 2016, at the Muri-Okunola Park, Adeyemo Alakija Street, Victoria Island, Lagos state.

Burna Boy has been working non-stop since the release of his sophomore album #OAS (On A Spaceship) last November, releasing videos and gaining acclaim in different African cities. Earlier in the year, he won the One Africa Award and two more at the Metro FM Awards in South Africa. Only last weekend, he lit up the Lagos NYSC camp with a string of sensational performances.