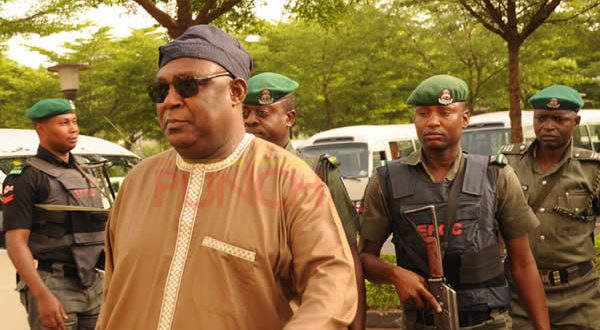 I Changed N7.8bn To Dollars For Badeh – NAF Cashier 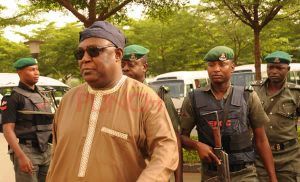 Abu, who was testifying as the second prosecution witness in Badeh’s ongoing trial, said he routinely converted the N558.2m to dollars which the prosecution alleged was being handed over to the former Air Force chief monthly.

The Economic and Financial Crimes Commission is prosecuting Badeh alongside a firm, Iyalikam Nigeria Limited, on 10 counts of money laundering bordering on alleged fraudulent removal of about N3.97bn from the Nigerian Air Force’s account.

The anti-graft agency accused Badeh of using the fund to buy and develop landed assets in Abuja for himself and two of his sons between January and December 2013.

Abu stepped into the witness box after the first prosecution witness, a former Director of Finance and Account of the Nigerian Air Force, Air Commodore Aliyu Yishau (retd.), completed his testimony on Wednesday.

Yishau had testified how he was handing over the dollar equivalent of the N558.2m to Badeh at the Chief of Air Staff’s official residence on a monthly basis and also how he helped Badeh to use the money to acquire landed assets in Abuja.

Abu, who was led in evidence by the lead prosecuting counsel, Mr. Rotimi Jacobs (SAN), on Wednesday said he converted N558.2m monthly removed from NAF’s Personnel and Emolument account for 14 months between November 2012 and December 2013.

He said within the 14 months period, a total of over N7.8bn was set aside and converted to dollars.

Abu explained that he and the Financial Officer at the headquarters of the Nigerian Air Force Camp, Mogadishu Cantonment, Asokoro, Abuja, Group Captain Mohammed Lawal Sini, (now Air Commodore), were the only signatories to the six accounts operated by NAF.

He said Sini gave him the instruction for the monthly setting aside of the  N558.2m immediately he (Sini) became the Finance Officer in November 2014, about a month after Badeh assumed the office of the Chief of Air Staff.

He explained that the N558.2m was a monthly leftover in the Personnel and Emolument account of the NAF after the payment of members of staff salaries and entitlements for a particular month.

He said after the payment of the staff salaries the leftover was usually transferred to the other five accounts of the Nigerian Air Force to augment NAF’s overheads and expenditures.

But he said no voucher was ever raised for its disbursement as it was done for other disbursement from other accounts of the NAF.

“After distributing the money into five accounts, the funds are used to augment the NAF overheads expenditure. We use them to pay estacode, non-regular allowances, training and operations, also purchase of aviation fuel.

“For the expenditure for the fund, we receive approvals from the headquarters of NAF, usually approved by the Chief of Air Staff, however, in November 2012, when the new Camp Finance Officer resumed, he informed me verbally that there was a standing instruction for the sum of N558,200,000 to be set aside monthly for headquarters, NAF training and operational purposes.

“He also informed me that the amount is to be converted to US dollars, except there is any other instruction to the contrary.

Under cross-examination by Badeh’s lawyer, Chief Akin Olujinmi (SAN), Abu confirmed that he never received any instruction relating to the setting aside of the N558.2m and its conversion to dollars.

He also said he had no official record of the dollar equivalent of the N558.2m.