May 12, 2016 Comments Off on Fuel Hike: NLC Mobilises For Nationwide strike 8 Views 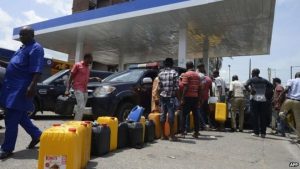 The General Secretary, NLC, Dr. Peter Ozo-Eson, said in a statement that the increase was unilaterally done and only showed the level of insensitivity and impunity of the government.

He said that the Congress had scheduled an emergency meeting of its National Executive Committee for Friday.

The NLC called on the Federal Government to revert the price to N86 and N86.50 or face the ire of the labour movement and its civil society allies.

The NLC said in the statement, “The unilateral increase in the price of petrol by the government represents the height of insensitivity and impunity, and shall be resisted by the Nigeria Labour Congress and its civil society allies.

“With the imposition on the citizenry of the criminal and unjustifiable electricity tariff, and resultant darkness and other economic challenges brought on by the devaluation of the naira and spiralling inflation, the least one had expected at this point in time was another policy measure that would further make life more miserable for the ordinary Nigerian.

“The latest increase is the most audacious and cruel in the history of petroleum product price increase as it represents not only about 80 per cent increase, but is tied to the black market exchange rate.”

However, the President of the TUC, Mr. Bala Kaigama, said that the congress could only speak on the increase after a meeting of its organs.

Both NUPENG and PENGASSAN said they would on Thursday (today) and Friday deliberate on the new pump price.

The South-West Chairman of NUPENG, Alhaji Tokunbo Korodo, disclosed this in an interview with the News Agency of Nigeria in Lagos on Wednesday.

According to him, it is too early to make any official statement until the two bodies meet to deliberate on the matter.

He said that the meeting would discuss the new development and come up with a stand on the matter.

However, the Director-General, Lagos Chamber of Commerce and Industry, Mr. Muda Yusuf, commended the decision of the government to liberalise the petroleum downstream sector given the acute resource constraint that the country currently.

“The overregulation of the sector and the subsidy regime had put enormous pressure on government finances and on our foreign reserves. It was evident that the policy choice was not sustainable. The review is in the long term interest of the economy and the people,” he said.

The Managing Director and Chief Executive Officer, Financial Derivatives Company Limited, Mr. Bismarck Rewane, said, “It (fuel subsidy removal) is an excellent economic policy move and you will see the effects very soon, because the current system is not working. It costs as much to administer as it costs to buy the fuel. So, if you now take away the cost of administration, then effectively the price of fuel will come down.

“That is the first big step in the direction of a deregulated and perfect market. Whatever the price is, if it is determined by the market, it will come down. Markets are by nature efficient. After this move, the next thing that will happen is that we will have fuel everywhere in the country. And it will increase productivity and bring down inflation.”

The Head of Energy Research, Ecobank Capital, Mr. Dolapo Oni, said the government had taken a good step forward with the decision.

The Executive Secretary, Major Oil Marketers Association of Nigeria, Mr. Obafemi Olawore, said, “We are looking for deregulation. If that is deregulation, we believe it is a step in the right direction. But we have not been officially communicated,” he said.

The National Operations Controller, Independent Petroleum Marketers Association of Nigeria, Mr. Mike Osatuyi, said, “The move is fantastic. That is what we have been clamouring for and we are going to have peace in the country. There is going to be price differential and competition in the market.”

Similarly, the President, Manufacturers Association of Nigeria, Dr. Frank Jacobs said the removal of the fuel subsidy was a step in the right direction.