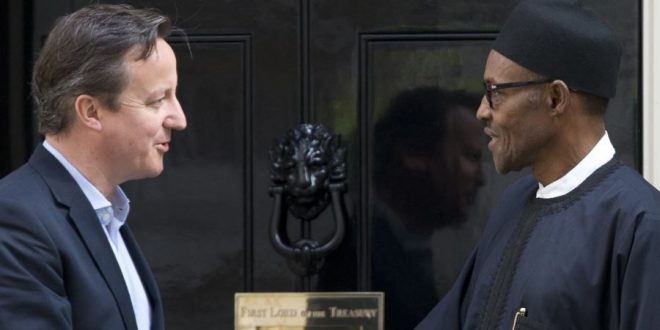 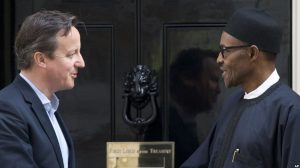 President Muhammadu Buhari says he is more interested in recovering the stolen assets of Nigeria in the UK than demanding an apology from Prime Minister David Cameron who made a scathing remark about Nigeria on Tuesday.

Buhari said this on Wednesday at a meeting hosted by Commonwealth ahead of the anti-corruption summit in London.

“I’m not going to demand any apology. All I demand is a return of assets. What would I do with apology?” the president asked.

“I have already mentioned how disgraceful one of the Nigerian executive dressed as a woman  to leave Britain, leaving behind his bank account and fixed asset, which Britain is prepared to hand over to us, this is what I’m asking for. What will I do with apology? I need something tangible.”

Describing corruption as a “hydra headed monster”,  Buhari said it does not differentiate between developed and developing countries.

“Corruption is a hydra headed monster. It does not differentiate between developed and developing countries. It constitutes a serious threat to good governance, rule of law, peace and security as well as well as development programmes aimed at tackling poverty and economic backwardness,” he said.

“This consideration informed my decision to attend this event as well as the anti-corruption summit organised by Prime Minister David Cameron that will be held tomorrow.

“Tackling the menace of corruption is not an easy task, but it is possible even if many feathers have to be ruffled.”

The Prime Minister had referred to Nigeria as a “fantastically corrupt” country during a meeting with Queen Elizabeth.

However, his comment sparked negative reaction across the world, with Transparency International describing Britain as “a safe haven for corrupt assets”.

“There is no doubt that historically, Nigeria and Afghanistan have had very high levels of corruption, and that continues to this day,” said Cobus de Swardt, managing director of the organisation.

“But the leaders of those countries have sent strong signals that they want things to change, and the London anti-corruption summit creates an opportunity for all the countries present to sign up to a new era.

“This affects the UK as much as other countries: we should not forget that by providing a safe haven for corrupt assets, the UK and its Overseas Territories and Crown Dependencies are a big part of the world’s corruption problem.”

The UK Guardian also accused Cameron, Britain and the west of “epic hypocrisy”.

“They have spent decades ordering poor countries and failed states to sort out their problems with dodgy money, even while taking much of that dodgy money and ploughing it through their banks, their ritzy stores, their estate agents, and their offshore tax havens,” the newspaper said in an editorial on Wednesday.