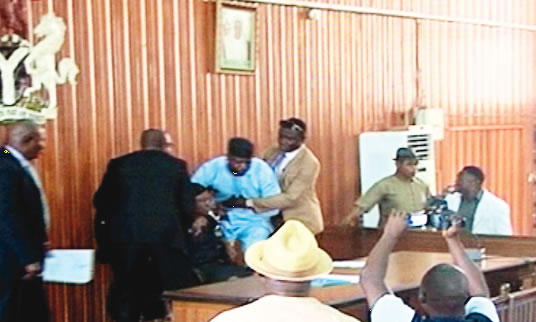 How Edo Speaker Feted Lawmakers Who Impeached Him With Pounded Yam

May 9, 2016 Comments Off on How Edo Speaker Feted Lawmakers Who Impeached Him With Pounded Yam 27 Views 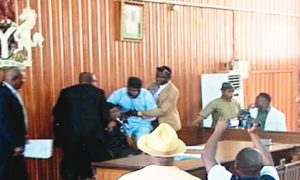 The Tuesday change of leadership in the Edo State House of   Assembly has disrupted the political equation of the state, no doubt about that. While Edo North produced the governor in the person of Comrade Adams Oshiomhole, Edo South has the deputy governor and Hon. (Mrs) Elizabeth Atvie, just elected Speaker.

Edo Central lost it after the former Speaker, Rt. Hon. Tiger Victor Edoror, was impeached and how to appease the Esan now is the headache of the leadership of the APC in the state. But the gladiators in the state House of Assembly who plotted the sack of Edoror are not bothered about that.

Their advice to the leadership of the party is that they should be patient until after the governorship election in September since a Benin man is expected to emerge as governor either from the APC or the PDP.

This followed the plea from Oshiomhole and the state Chairman of the APC, Anslem Ojezua, who is from Edo Central like the Impeached Speaker, that Edoror should be forgiven so that the Esan will not feel marginalized particularly as the governorship election beckons. The lawmakers shunned their political parties to back the impeachment. Out of the four PDP lawmakers, three signed up to the impeachment, including Patrick Iiuobe and Ezehi Igbas, who are from Edo Central like the former Speaker.

As of the day of the impeachment, 16 lawmakers signed the impeachment notice but two APC lawmakers, who initially were with Edoror, defected to the camp of the16 last Thursday, making the number 18. As it seems, the lawmakers may not have observed the alleged excesses of the ex-Speaker because majority of them, particularly the new ones, were already established men, some of them former council chairmen  and politicians who have succeeded in their various businesses.

The eyes of the lawmakers opened, after they met with the governor who tried to mend the seeming face-off between members of his team and the lawmakers. Most of the Commissioners in the Oshiomhole cabinet had faced fire from the lawmakers making them to wonder whether the House is  dominated by  the APC or the opposition PDP.

The lawmakers, who had been surviving through monthly contributions, began to accuse Oshiomhole  of taking them for granted and vowed to frustrate his activities. They lamented alleged failure by the Executive to provide them with official vehicles since they were sworn-in in June 2015, non-release of funds for constituency projects and their other entitlements. And each time they confronted the Speaker, the impression allegedly given to them was that the Executive was yet to release funds.

Sensing danger, Oshiomhole invited the lawmakers penultimate week for an interaction;  it was on that occasion that the governor disclosed all he had released to the Speaker. While disclosing that he had always released N54million for the running of the Assembly, and the Speaker earns about N9million monthly for the running of his office, Oshiomhole added that the Speaker receives N1million every weekend for trip to his constituency while his deputy received N500,000.

The governor went on to reveal that the vehicles for the legislators were delayed because the Speaker  allegedly insisted that the money for the purchase should be given him in bulk so he could handle it. That if he had agreed with the suggestion that the vehicles be bought by instalment since the state government may not have the bulk of the money to purchase 24 cars at once, all the members would have had their cars by now.

He said the issue of constituency project funds was being taken care of as that was delayed due to the drop in allocation to the state. The governor’s disclosure shocked the lawmakers. Edoror and his deputy were there helplessly watching as Oshiomhole dished out the allegations. The lawmakers, who had prepared for war with the governor, ended up apologizing to the Comrade. Unknown to the impeached Speaker, the lawmakers commenced a meeting after meeting with the governor where they plotted his fall.

Ironically, the very day the impeachment plot was hatched, Edoror hosted some of the lawmakers at his residence where they ate pounded yam, as if he had the feeling that the final meeting to impeach him held till early hours of Tuesday. His sudden change of attitude would have helped him if not that the lawmakers involved in the impeachment plot had vowed not to change their minds. And it was because the ex-Speaker hosted his colleagues that Tuesday morning that made him to enter plenary late that day. He arrived the hallowed

chamber after the new Speaker had been sworn-in by the Clerk of the House, Mr Ugiagbe. It was alleged that there was an attempt to manhandle the woman Speaker, but this was resisted by her colleagues who equally were prepared for any onslaught. That was why sporadic gunshots were witnessed until the police dispersed the lawmakers with tear gas. But after that, offices of the lawmakers were looted.

The lawmakers anger was that while they relied solely on their about N370,000 monthly salaries, the Speaker was taking home nothing less than N15million monthly. Another issue that had worsened the Speaker’s case was the issue of N54 million June 2015 monthly overhead which the lawmakers alleged disappeared. H

owever, Edoror, who addressed journalists shortly after the incident, debunked all the allegations levelled against him, insisting he remained the Speaker. Chief Whip of the House, Kabiru Adjoto, who described his claims as laughable, said: “He is gone and gone for good. We have a new Speaker and it is over for him”.

Asked whether the impeachment is related to the war between the governor and his deputy, Pius Odubu, and alleged plot to impeach the deputy governor, Adjoto declared: “Who is telling you people that rubbish. As we speak, the governor has been calling most of us to allow Edoror stay but we have told him this is our matter, it has nothing to do with party”.

Meanwhile, the new Speaker Ativie, has visited the state Commissioner of Police, the Director of DSS and other leaders in Edo, informing them of the change of leadership in the House. She vowed to prosecute Edoror if the committee set up to probe his administration finds him guilty.  She added: “We are going to go back to the old days when we had robust legislation that will help the executive carry out its duties to the best of Edo people. Welfare of my members will be paramount to me.

We told him we had 14 items and none had been released. But the governor looked at us and said out of the 14 items, he had released 12 and he started enumerating the figures and members were shocked.

And he (Edoror) was there when the governor told us and he never denied it. That was when members came out and said this must stop”. However, Oshiomhole is scheduled to hold a meeting with the lawmakers and the leadership of the party today, Sunday, to see the best way to resolve the matter.