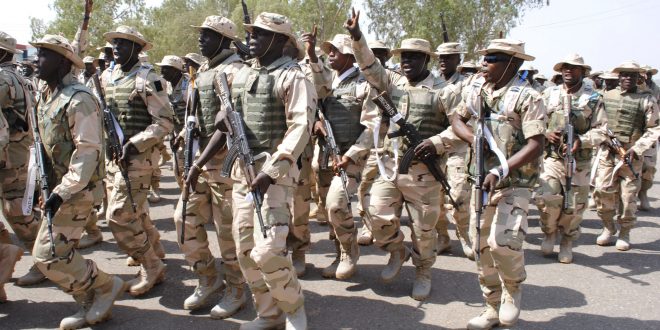 The troops of the Nigerian Army have killed 18 cattle rustlers with several others injured in an operation in Zamfara State.

Also, the military on Thursday said that 13 members of the Boko Haram insurgents were killed in the ongoing clampdown on Sambisa Forest, the sect’s hideout in Borno State.

The acting Director, Army Public Relations, Col. Sani Usman, said in a statement on Thursday that the troops of 223 Battalion, 1 Brigade of the Nigerian Army, who were on patrol, carried out the attack when they were alerted to the presence of the bandits in the area.

He said that the troops averted what would have been an attack on Dansadau community by the cattle rustlers and armed bandits.

He said that the troops laid ambush for the bandits, who stormed the area en masse on motorcycles – on their way to wreak havoc at Ruwan Tofa and Babban Doka villages of the Dansadau district of Mari Local Government Area.

“The patrol team laid an ambush for the suspected cattle rustlers and armed bandits who came en masse on motorcycles fully armed.

“It was gathered that they were on the way to Ruwan Tofa and Babban Doka villages in the Dansadau district of Maru Local Government Area, Zamfara State, to wreak havoc on the innocent people of those communities,” he said.

According to him, the troops recovered 11 AK-47 rifles, one G3 rifle, one locally-made pistol, 11 AK-47 magazines, a magazine of a G3 rifle and 161 rounds of  7.62mm (special)  ammunition in addition to destroying the bandits’ camp at Babban Doka area.

Usman said that the troops were combing the area for some of the bandits who escaped the attack with gunshot wounds.

He called on the citizens to volunteer information to the military on the activities of cattle rustlers, armed bandits, and other criminal elements in the area.

The Head of the counter-insurgency operation in the North-East, Operation Lafiya Dole, Maj. Gen. Lucky Irabor, said 400 Nigerian hostages and two Cameroonians were rescued from the insurgents in three Borno villages on Wednesday.

Irabor said the troops rescued 34 adults and 28 children in the cleared villages.

He said described the operation as a tremendous success recorded against Boko Haram insurgents.

He said the cleared villages include Chingurimi, Walasa and Masa in Sambisa Forest of Borno State.

Irabor added that during operation, the soldiers made substantial gains by destroying many terrorists’ locations before freeing the first batch of 62 hostages.

He said, “So far, on April 28, troops cleared villages of Balazala and Durel. On April 29, Sasawa village was cleared while on May 1, Kasere village was also cleared of Boko Haram terrorists.”