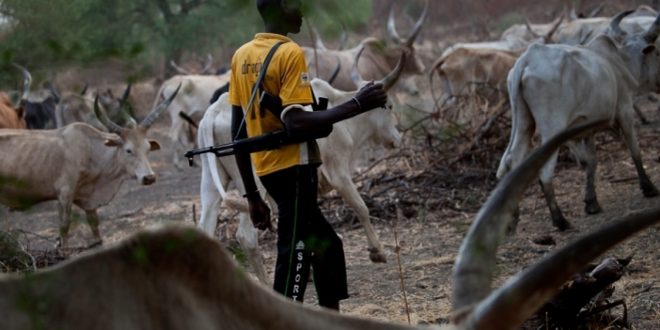 The suspected herdsmen were said to have told the soldiers that they were on a mission to recover their stolen cows.He said that 56 others who were also armed were arrested by the soldiers at a military checkpoint at Dantata, along the Abuja Airport Road.

He said, “A group of 36 herdsmen in Diana Truck and Toyota Camry car with registration number Abu Kuje 994 FX and Niger SUL 541 XA were intercepted and arrested at 177 Guards Battalion location by Keffi checkpoint.

“During the interrogation by troops at the checkpoint, they claimed to be going to Nasarawa Local Government in Nasarawa State.”

He said that the arrested herdsmen would be handed over to the police for prosecution.

This came just as President Muhammadu Buhari has ordered the deployment of military to all parts of the country currently witnessing bloody clashes between herdsmen and farmers.

The Senior Special Assistant to the President on Media and Publicity, Garba Shehu, disclosed this while featuring on a breakfast programme of Channels Television, Sunrise Daily, on Monday.

The programme was monitored by one of our correspondents in Abuja. Shehu said there was no truth in the claim that Buhari had been largely silent on the issue of the clashes.He recalled that the President had taken the issue before the National Council of State with a view to getting state governors’ inputs to the solutions.

In the meantime, he said the government was contemplating carving out of grazing reserves for cattle rearers.