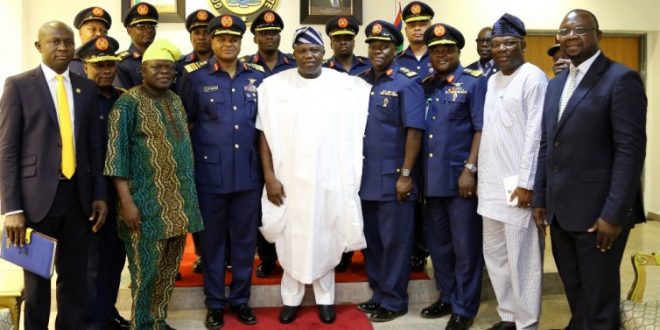 April 19, 2016 Comments Off on Ambode Seeks Collaboration On Air Surveillance Against Vandals 28 Views

Lagos State Governor, Mr. Akinwunmi Ambode on Tuesday harped on the need for the State Government and the Nigerian Air Force to collaborate in mounting serious air surveillance on the waterways in the State to nip all criminal activities on the waters in the bud. 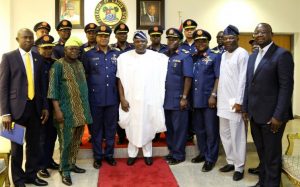 ho spoke when the Chief of Air Staff, Air Marshal Sadiq Baba Abubakar, paid him a courtesy visit at the Lagos House, Ikeja, said the call became imperative considering the recent approval for purchase of surveillance helicopters by President Muhammadu Buhari to the Air Force.

He said Lagos, being the logistics headquarter of the Air Force, should benefit tremendously from the helicopters, adding that such would go a long way in complementing the security architecture in the State on the land, water and in the air.

The Governor acknowledged the fact that there has been a very cordial relationship in the past years between the State Government and the Nigerian Air Force, and expressed readiness not only to enhance the relationship, but also improve on it.

He said: “This particular administration is very sensitive to security issues and in the last eleven months, we have tried as much as possible to put security in the front burner of our tripod in running Lagos. We believe strongly that security and development are twins. There is no way we can develop if there is no security and that is why we are laying more emphasis on protecting the lives and property in Lagos on the road, on our waterways and also in the air.

“I’m pleased to state that we have contributed some helicopters to the Rapid Response Squad (RRS) of the Nigerian Police. I like to also commend President Muhammadu Buhari for the recent approval given to the Nigeria Air Force to procure more helicopters and going by the fact that Lagos is the logistics base of the Air Force, we know we will benefit from that as well.

“But more importantly, we need you to collaborate with us in the area of air surveillance against those vandals on our waterways and also to assist us in complementing our efforts. The surest way to go for Lagos is for us to secure the people and let them live their lives more comfortably and we believe that your visitation here is an attestation to that new collaboration,” Governor Ambode said.

While pledging to assist the Nigerian Air Force in providing key infrastructures to the operational base of the Force in Shasha and the Women and Child Hospital in Badagry as well as in other areas, Governor Ambode also assured that the State Government would continue to support security agencies with equipment such as vehicles and patrol motorcycles.

He, however, expressed satisfaction with the personnel of Air Force posted to Lagos, saying they have been very peaceful and law abiding.

Earlier, the Chief of Air Staff (Abubakar) said he was in Lagos House to thank Governor Ambode for the support and warm hospitality which the Force had enjoyed from his administration so far, and to seek further efforts to improve on it.

He said Lagos, as the logistics base of the Force, is very strategic to the operation of the Air Force especially in supplying equipment to further the war against insurgency and other criminal activities within the country.

Besides, Abubakar pledged the readiness of the Air Force to continue to support the present administration especially be deploring both air and ground assets to collaborate with other security agencies to ensure security of lives and property in Lagos.