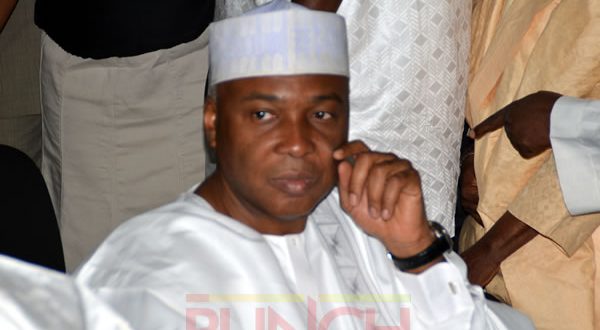 The Chairman of the Code of Conduct Tribunal, Danladi Umar, has directed that the trial of the Senate President, Dr. Bukola Saraki, will henceforth proceed day to day from today (Monday) until the conclusion of the case.

He said the trial will begin 10am and end 6pm everyday.

Umar, who gave this directive at the resumed hearing in the case on Monday, said his decision to conduct the trial day to day was in line with the provisions of section 396(6) of the Administration of Criminal Justice Act.

He gave the directive in response to a request for one hour stand-down  by the lawyer who represented the prosecution on Monday, Mr. Gabriel Esegine.

Esigine told the tribunal that the lead prosecuting counsel, Mr. Rotimi Jacobs asked for the stand-down to enable him to appear briefly before the Court of Appeal in Abuja.

But in response, Umar, who was not satisfied with the request for stand-down warned that the tribunal would no longer wait for anybody.

He said, “By virtue of 396 (6) the Administration of Criminal Justice Act, 2015, criminal trial of a defendant after arraignment shall proceed day to day.

“This is what the tribunal intends to do. I’m saying this to both the prosecution and the defence, this tribunal will not wait for anybody.

“We will start by 10am till about 6pm till the conclusion of the case.

“For the benefit of those who want to pray we will give a break for about 15 minutes. By 4pm, we will give another 15 minutes break to enable people to stretch their legs.”

The lead defence counsel, Chief Kanu Agabi (SAN), however joined the prosecution in pleading with the tribunal to grant the stand-down.

The CCT chairman then reluctantly stood the case down till 12pm.

But as of the time of filing this report at 11.11am, Jacobs had arrived the tribunal.

The trial is to continue today with the testimony of the first prosecution witness.

During the short court proceedings, Saraki, decked in a white traditional attire with a cap to match, sat in the dock, while a number of senators sat in the audience.