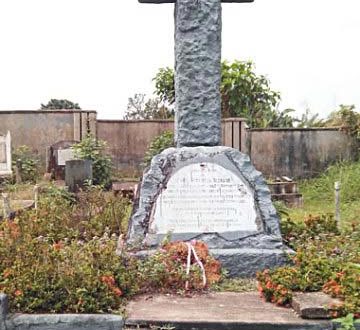 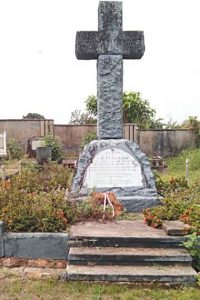 Her king size statue pierces the skyline at Mary Slessor Avenue, a strategic intersection in Calabar    named after her  which links the biggest market in the city with  University of Calabar, making her image one of the most conspicuous  in the ancient town.

Mary Mitchell Slessor, a Scottish missionary, born in Abedeen, Scotland in 1848, became a chief  missionary among the up- River tribes land people where she was credited with putting an end to the  obnoxious practice of the sacrifice of twins and, after sixty three years, she passed on  in 1915.

Her foot prints remain    indelible in places like Okoyong, Creek Town, Odukpani, Anigheje ,    Old Calabar    and many other places where, with zeal and uncommon commitment to the cause of Christianity and humanity, she  fought against obnoxious traditional practices    sometimes with    threats to her life.

When she passed on  more than one hundred years ago, her body was interred      in Udi Obot Mbakara (grave yard for white people) which holds the bodies of      white missionaries and colonial officers  who departed before her.

The site, located on the apex of  a hill overlooking the    Calabar sea, the route through which she navigated to Calabar where she worked and died, was seen as an ideal final resting place by the Presbyterian  Church, the home of her faith. Her tomb, enamoured in dark colour and bearing number 114, stands at the centre of the grave yard and towers above every other tomb that lies therein.

Owing to the historical significance of the place, Cross River State Government, under Mr Donald Duke, took over the place from the Presbyterian Church and turned it into a tourism site several years back. The place was fenced, and its maintenance handed over to the state’s Ministry of Environment for regular trimming of grass and beautification.

One would expect that with  the body interred in such a  place among other missionary colleagues and turned into a tourism destination, the woman would be resting in peace after such a long and laborious missionary work but that can hardly be the case with the present    state of the grave yard. The tourism concept    has since died and    the place is    today an  eye sore.

The graveyard is over grown with weeds, rodent infested, home to wild reptiles and snakes. As if those are    not enough, miscreants have turned the place into a lavatory of sorts    where they defecate. The miscreants have carved a large hole    on    the perimeter fence  along the Marina  axis through which they access    the place to smoke    marijuana, defecate and carry out other sordid acts.

“Apart from desecrating the place by going there to smoke    marijuana and excrete, they sometimes bury their dead colleagues    there since they cannot afford to pay for a place in Hawkins Cemetery or other burial places” Pastor Jones David of the Presbyterian Church, Eyamaba told Sunday Vanguard. He said the church handed over the place to government about  12  years ago when the then governor, Mr Donald Duke saw the potentials of the place as tourists site but as time went by, the place became neglected and weeds were allowed to over grow the place turning it to an eye sore.

“Snakes and reptiles have turned the place into a home and if you dare go deep    inside, you stand the risk of being attacked by a snake or iguana”. Mr Joe Mary Ekeng, the Executive Secretary of Calabar Urban Development Authority, said he sends his boys there from time to time to tidy the place and that during the centenary anniversary of her death; it was his agency that took responsibility for clearing the place of debris and weeds.