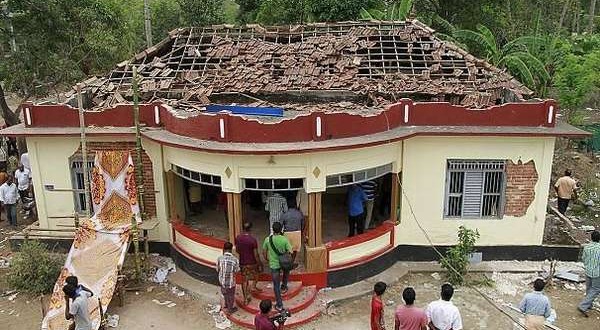 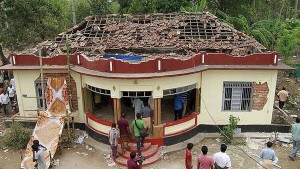 A temple in the southern Indian state of Kerala was gutted by fire on Sunday, killing no fewer than 105 people.

At least, 500 others were injured in the inferno, which broke out from a fireworks display, marking Hindu new year celebration.

The explosion at the Puttingal temple killed at least 105 people and injured more than 500, CNNquoted Indian authorities as saying.

It was learnt that the building was crowded with thousands of devotees celebrating the Hindu new year when the explosion happened at around 3.30am local time.

One part of the Puttingal temple in the village of Paravoor, near the city of Kollam, is reported to have collapsed, trapping people underneath, as the blaze swept through the complex, Sky News reports.

Television footage showed images of huge clouds of white smoke billowing from the temple, as fireworks were still going off in the night sky.

Successive explosions sent huge chunks of concrete flying as far as half a mile, eyewitnesses said.

Nirmala, 58, said she was sleeping in her house with her daughter and granddaughter when the explosion occurred.

She said, “I thought there was an earthquake and hid under the bed. When I came out, there was no electricity. People were running everywhere, and burnt bodies were on the ground. The smell was really bad.”

A resident, Krishna Das, said, “People were screaming in the dark … no one knew how to find their way out.”

According to reports, the blaze is thought to have been caused by a firecracker that fell on a shed where fireworks were stored for the festivities.

The air force and navy were called in to evacuate the most critically hurt and medics were flown in from the capital New Delhi.

Kerala home minister, Ramesh Chennithala, said firefighters and police worked through the night to douse the fire and take the injured to hospitals.

“Now the situation is under control… the police are on the spot,” he said.

State health authorities said many of the injured had been driven to the state capital Thiruvananthapuram as hospitals in Kollam were stretched.

Indian Prime Minister, Narendra Modi, visited the site and a hospital where some of those wounded in the explosion were being treated.

Every year, the Paravoor temple holds a competitive fireworks display, with groups putting on light shows for thousands of devotees gathered for the last day of a seven-day festival honouring the Hindu goddess Bhadrakali.

This year’s competition was happening without permission after the state’s High Court banned competitive light shows at temples.