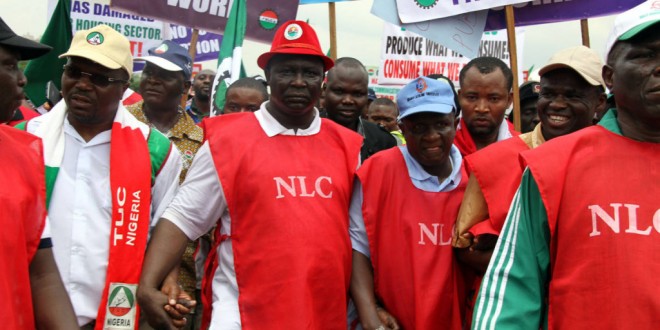 April 7, 2016 Comments Off on State Of The Nation: NLC To Declare One-Day National Warning Strike 20 Views 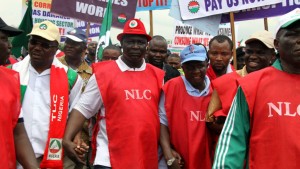 THE Nigeria Labour Congress (NLC) has resolved to embark on a one-day  national warning strike over the state of the nation, especially the increase in electricity tariff.

In an address presented by the NLC president, Comrade Ayuba Wabba, at the opening session of the Central Working Committee (CWC) meeting of the congress held at the Labour House, Abuja, on Wednesday, he said response to the prevailing economic situation by all tiers of government in the country had been a source of worry for many Nigerians, especially Nigerian workers.

According to him, Nigerians were feeling the heat and harsh realities of the economic crisis in the country, whose immediate cause was the drastic fall in the price of crude oil, which was the primary source of our nation’s foreign exchange earnings.

Specifically, the NLC president decried the unjustifiable 45 per cent increase in electricity tariff, saying  the increase was “illegal, unfair, unjustifiable and a further exploitation of the already exploited Nigerians.”

He pointed out that the due process in the extant laws for such an increment was not followed in consonance with Section 76 of the Power Sector Reform Act, 2005.

Besides, Comrade Wabba stated that there had not been significant improvement in service delivery, coupled with the fact that most consumers were not metered in accordance with the signed privatisation Memorandum of Understanding (MoU) of November 21, 2013, which stipulated that within 18 months gestation period, all consumers were to be metered.

He regretted that despite the national action organised by the congress in the 36 states of the federation, including Abuja, which was adjudged successful; the intervention of the National Assembly and especially the Senate President, who received the protesters at the National Assembly premises in Abuja, nothing had changed to redress the hike in tariffs.

According to him, the privatisation of the power sector was done in bad faith and it had become obvious that the investors did not have the capacity to improve power generation and supply in the country.

He said the CWC would agree on a day to embark on the strike, because according to him, several actions promised by the Federal Government to checkmate the tariff increment had not been implemented.

He said: “While the process is on, the tariff  increase has remained and under a worsening power supply situation. Not a few Nigerians are groaning under this burden. Not a few of them look to the congress for a solution.”

On the issue of fuel scarcity, he pointed out that when the first incident occurred  under this government, “we put it to sabotage and urged the government to deal decisively with the saboteurs, but with an eye to enhanced local production as an enduring solution. When the second incident happened, we similarly reasoned the same way.

“However, with the latest incident of prolonged scarcity and confession by the Minister of State for Petroleum Resources that scarcity will persist till May as he is not a magician, regular scarcity might as well  be a familiar feature and we would do well to brace ourselves for long spells, except government does the needful.”

But Wabba declared that this would not be acceptable, saying “we must, however, make the point that spells of scarcity will not be acceptable to Labour and other Nigerians, because the human and economic costs are unimaginable.”

He added: “While we appreciate government’s effort to make available on an  uninterruptible basis, such effort must be seen to be result-yielding and immediate. Because of the place of petroleum products in the lives of the citizenry, its scarcity even for a day, generates ripple and crippling effects.”

He warned that the government might soon lose its credibility, because “one of the fastest ways for government to lose its credibility before the ordinary citizenry is scarcity of petroleum products  because the combined effects of scarcity of petroleum products and low power supply create misery for the people, as well as have a damning impact  on travel, jobs, productivity and the economy as a whole.”

The NLC president called for immediate constitution of the board of Petroleum Products Pricing Regulatory Agency (PPPRA) and the Nigerian National Petroleum Corporation (NNPC).

He added that the PPPRA was a government agency that had the right to fix and regulate petroleum prices, adding that any action taken as regards fuel price adjustment in the absence of a board of PPPRA amounted to illegality

Share
Previous Dasukigate: EFCC Arrests Jonathan’s Cousin, 1 Other
Next I Did Not Want To Be Governor- El Rufai