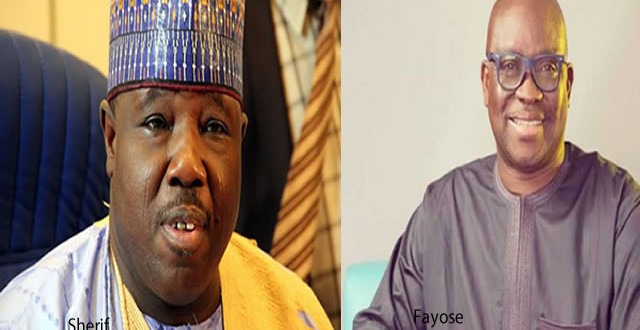 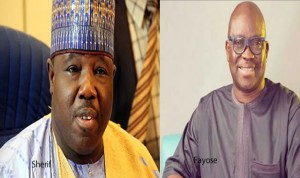 Some power brokers in the Peoples Democratic Party are plotting to counter an alleged plan by the current Chairman of the PDP, Senator Ali Modu Sheriff to transmute into the party’s presidential candidate in 2019.

There is a belief within the party that Sheriff and Ekiti State Governor, Ayodele Fayose, are planning to jointly run for the presidency in 2019.

A reliable source within the party told our correspondents that Fayose backed Sheriff for the chairmanship position because he (Fayose) had plans to be Sheriff’s running mate in the 2019 presidential election.

Two weeks ago, Sheriff, a former Governor of Borno State, had said that God “used Fayose to make me chairman.”

Already, the PDP, which is in control of only two northern states (Gombe and Taraba), has zoned the presidency to the North in 2019.

A member of the Board of Trustees of the party from the North-East who spoke on condition of anonymity, said there was no way both men would be allowed to fly the party’s ticket.

The source, a party man of several years standing, said, “This is a joke of the century. These two are controversial. Sheriff has not even been allowed into the party fully.

“Now, they are saying he wants to be President. It isn’t possible. That will signify the death of the party as millions would either defect or go and form another party.”

A reliable source within the party said some party chiefs were bothered by Sheriff and Fayose’s close relationship. In recent times, both men have attended several social events together including the wedding of Fayose’s niece in Lagos on Saturday.

He said, “Sheriff is rich but he is not the richest northern politician in the PDP. He does not have the backing of the northern elements in the PDP given the fact that he is still quite new in the party. Sheriff’s tenure is meant to end by May but there is a plot to elongate his tenure till 2018 and in the process, gain control of the party structure.

“He will then resign and run for the presidency but we will not allow him.”

The source said, “Already, supporters of Governor Ibrahim Dankwambo of Gombe State and former FCT Minister, Bala Mohammed, are spoiling for a fight as both governors also have presidential ambitions. In the current dispensation, the governors are two of the most influential PDP politicians from the North.

“Fayose has obviously miscalculated. He is going in October 2018 and his immunity will end seven months before Buhari’s tenure ends. With the way he has been attacking President Muhammadu Buhari, I don’t know how he will survive without his immunity within that period. He thinks his support for Sheriff will endear him to northern politicians but they are not happy with him with the way he has been attacking Buhari.”

Two weeks ago, the South-West chapter of the party had declared its support for the North to retain the PDP’s national chairmanship position and endorsed Senator Buruji Kashamu as its zonal leader.

Another source, a senior party man, told our correspondent that the endorsement of Sheriff was a ploy to ensure that he remained as the chairman till 2018.

The source who is a member of the PDP Ministers’ Forum, told our correspondent that Fayose, Governor Nyesom Wike of Rivers State and Kashamu were “taking members of the party for granted”.

“Sheriff’s plan is to metamorphose from the chairman to the presidential candidate and that was why Fayose brought him in. Fayose, Wike and Buruji are the ones supporting Sheriff for President. The North will get the presidency but their plan will not work because Sheriff is not our candidate,” he said.

Why Fayose is backing Sheriff — Aide

However, Fayose’s Chief Press Secretary, Mr. Idowu Adelusi, said Fayose was concerned with governance and thus had no time to be scheming for 2019.

Adelusi said Fayose was supporting Sheriff because he wanted the party to be strong ahead of the 2019 elections.

“His plan is to deliver the dividends of democracy. His support for Sheriff is to stabilise the party so that the party can win again in 2019. The party is almost in disarray due to the exodus of many of the leaders to the APC. He supported a national chairman that can re-engineer the party. His love for Sheriff is based on the love he has for the party.”

A chieftain of the PDP in Ogun State, Mr. Fasiu Bakene, in an interview with SUNDAY PUNCH, said the South-West should produce the party chairman.

He stated, “The recent call by some members of the PDP from the South-West pushing for the national chairman from the North is nothing but for personal benefit of the major convener of the meeting.

“Firstly, since 1998, the South-West had never produced the party’s chairman. Secondly, the Senator Ike Ekweremadu Committee had zoned the presidency to the North. Thirdly, it is an attempt to arm-twist and get favour of the party’s national chairman.”

On his part, a Board of Trustees member of the PDP, Chief Ebenezer Babatope, said that Fayose is qualified to emerge as the vice-presidential candidate of the PDP.

Babatope, who spoke in a telephone interview with one of our correspondents, on Saturday, said Fayose had yet to make his rumoured ambition public.

The former Minister of Transport, however, said that it was the turn of the South-West region to produce the next national chairman of the PDP.

He said, “Governor Ayodele Fayose has not told anyone that he wants to vie for the vice-presidential ticket of the PDP. He is a bold politician, who would come out and contest for an office he wishes to occupy. But so far, all is still in the realm of speculation.

“The South-West wanted the position of the national chairman of the PDP but former President Olusegun Obasanjo truncated the aspiration because he wanted to become the PDP BoT chairman.”

When asked if he was in contention for the PDP national chairmanship, Babatope said he was not.

“I am not running for the PDP national chairmanship. But I will support anyone from the zone to clinch the position. The South-West zone deserves the position.

“If the North is producing the presidential candidate, the South-West should have the national chairmanship position” he said.

Babatope said the vice-presidential ticket of the PDP would be up for grabs in 2019 while that of the national chairmanship is a pressing issue.

“When we reach the river we would cross it. The vice-presidential ticket would be vied for in 2019 but the national chairmanship post is a pressing issue,” Babatope said. 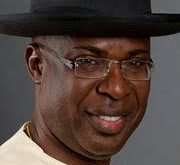