April 2, 2016 Comments Off on No Negotiation, No Surrender, Boko Haram Tells FG 70 Views 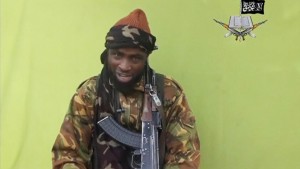 A new video was released on Friday by the Boko Haram jihadist group, denying any suggestion that it might negotiate with the Federal Government.

This is coming just about a week after its leader, Abubakar Shekau, said in March that his time as the head of the group might be coming to an end.

The previous video showed Shekau, who appeared thin and spiritless, delivering his message without his usual fiery manner.

This had prompted speculation from the Army that the Islamist group was on the verge of collapse in the face of a sustained military counter-insurgency.

However, in a Friday video posted on YouTube, which showed men holding AK-47s and posing in front of Toyota Hilux pick-up trucks and a lorry mounted with a military cannon, Boko Haram maintained that it was still a potent fighting force and would not surrender.

According to an AFP report, a masked man in camouflage said in a prepared script in Hausa that, “You should know that there is no truce, there are no negotiations, there is no surrender. This war between us will not stop.”

It is, however, unclear whether Shekau was among the masked people in the video.

“Shekau is still the head of the ‘West African wing’,” said the masked man, who likened the sect to the Islamist insurgents in Iraq, Libya and Syria.

Boko Haram, which has killed over 20,000 people and displaced more than two million people from their homes, had pledged allegiance to ISIS in March 2015.

Meanwhile, the Nigerian Army has won back a number of territories from the militants, rescuing thousands of people who had been living under the sect’s control.

Commenting on the new video, an Africa security specialist, Ryan Cummings, said, “The (new) video appears to confirm collaboration between Boko Haram and the Islamic State group. The production quality bears the hallmarks of the Islamic State’s media wing.”

Share
Previous Buhari Doesn’t Have To Visit Agatu, Boko Haram Victims-Adesina
Next Tension In Rural Kaduna After Murder Of A Colonel