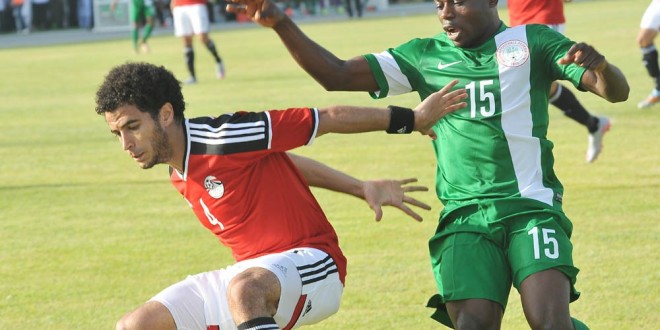 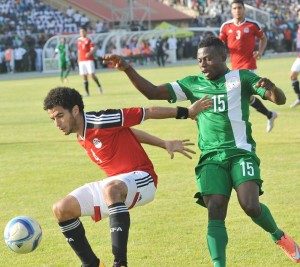 Egypt forced Nigeria to a 1-1 draw in the 2017 Africa Cup of Nations qualifier in Kaduna on Friday.

Roma’s Mohamed Salah grabbed a stoppage-time equaliser after Oghenekaro Etebo had put Nigeria ahead in the 60th minute.

Nigeria came close to opening the scoring in the fifth minute through Moses Simon but his shot was blocked for a corner.In the 16th minute Musa sent in a right-wing cross but goalkeeper El-Shannawy brought the ball down from the air.Stanley Amuzie almost gifted the Egyptians a goal in the 18th minute a sloppy play but Carl Ikeme blocked the strike for a corner.

A minute later Simon had a chance after beating his marker but El-Shannawy stop his low shot from going in.In the 25th minute, the Eagles had a free-kick close to the Egyptian box after a foul on Ighalo but Etebo skied it over the bar.

Simon, on 36 minutes, did a good job on the left wing going past his marker but his delivery was cleared away.Ahmed Musa made a run towards the Egyptian area in the 40th minute only to hit a tame shot which didn’t bother El-Shannawy

In the 45th minute Kelechi Iheanacho hit a low shot but El-Shannawy palmed away for a corner.Odion Ighalo had his first chance on goal in the 46th minute off a corner but he shot over the bar.

In the 48th minute of the second half Ighalo almost put Nigeria ahead off a overhead kick but the ball went inches off the post.Musa made a darting run on 55 minutes but his left strike was well saved by El-Shannawy.

Etebo opened the scoring in the 60th minute pouncing on a rebound shot from Iheanacho that came off the bar.The Eagles made their first chance immediately after the goal, bringing on Aminu Umar for Iheanacho.

Ikeme made a good save in the 65th minute off a goal mouth scramble.In the 67th minute Mohamed Elneny hit a long range strike but it went wide.Musa hit a right-foot strike outside the Egyptian box in the 70th minute but it went inches off the target.

The Eagles came close again in the 71st minute which El-Shannawy palmed away.In the 72nd minute the Eagles made a second change, bringing on Victor Moses for Musa.

Moses took a left-foot shot outside Egypt’s 18-yard box which was well saved by El-Shannawy.Iwobi finally made his official debut for the Eagles when he replaced Simon in the 83rd minute.Moses would have doubled the lead in the 84th minute but his effort was cleared off the line by a recovering Egyptian defender.

But in the 92nd minute Salah who was left unmarked slot the ball past a helpless Ikeme.Egypt still top the group on seven points while the Eagles are on five points.Both teams will meet on Tuesday in the reverse fixture.