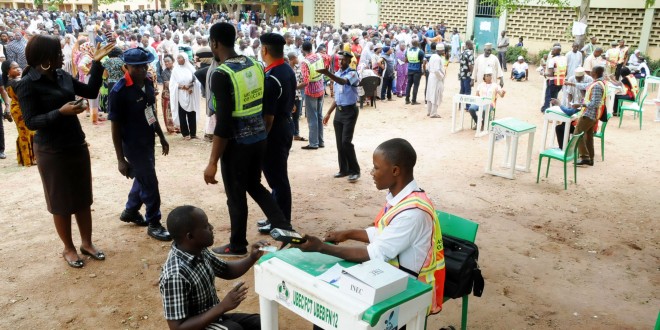 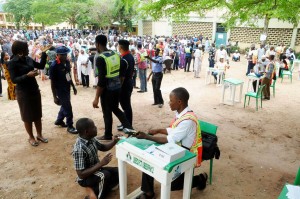 The federal and state legislative rerun elections in Rivers State, held yesterday,  erupted in violence that led to the death of at least five persons and culminated in the cancellation of polls in four local government areas of the state.

Dynamites, guns and other weapons of violence were used  in the elections that were also shadowed by accusations of sloppiness by officials of the Peoples Democratic Party, PDP, against the Independent National Electoral Commission, INEC. Governor Nyesom Wike, after voting in his Ward 9, Unit 7 in Obio Akpor local government area, was quick to chastise INEC for conducting what he described as a performance below expectation.

He was almost immediately countered by the Resident Electoral Commissioner, REC, Mr Aniedi Ikoiwak, who blamed political actors for instigating the violence that led to the shifting of polls in Andoni, Bonny, Khana and Gokana local government areas.

He also described as untrue the  allegations of the circulation of fake result sheets made by PDP officials, challenging them to produce what they imagined as the original result sheets. The heaviest casualties were in Asari-Toru local government area where three of the five persons were killed. Arrival of electoral materials

It was gathered that bullet hit a trader, simply identified as Gabriel Amachree, around the Town Square during  a  gun battle by political thugs in Buguma, headquarters of the local government. He was one of the two who lost their lives in Buguma.

The third fatality in the local government occurred in Abalama community. Community sources alleged that a chieftain of one of the political parties left his ward in Buguma  for  Abalama.  When those in Abalama insisted he should leave, he initially refused, a situation that provoked a confrontation.

The community sources said when  the party chieftain  saw that  angry youths were surging towards him, he jumped into his car and, in his speed, he  crushed a young man to death.

Dynamites were reportedly detonated in Konor local government area in the course of the elections. There was controversy also yesterday on the fate of the Secretary to the Rivers State Government, Mr Kenneth Kobani. While PDP officials claimed  he was like many other chieftains of the PDP arrested,  soldiers deployed to Bodo, headquarters of Gokhana local government area, restricted his movement before he was later let off.

Other PDP officials, however, insisted that he was arrested and later released in his Kono community. In Akinima, Ahoada West local government area, it was learnt that a young man, identified as Philip, was shot by security agents while trying to hijack materials. APC, PDP youths were reported to have clashed in Ward 4, Unit 8, Rumuodumayan, in Obio Akpor  local government area with some of them sustaining serious injuries.

Theophilus Nna Martin of the APC alleged he was stabbed by PDP thugs while Chile Ekwe made similar allegations against the APC, saying he was stabbed on the head.

Despite the strong show of force by the security forces, there were  reports of shootings by party activists to scare and intimidate opponents.

In Abonnema, headquarters of Akuku Toru local government area, there was shooting in the early hours of the day in the community. The INEC centre in Akinima, Ahoada West local government area, was allegedly attacked, leading to the beating up of some National Youth Service Corps  (NYSC) members by political thugs.

One of the NYSC members was reportedly hospitalised on account of the beating. A police spokesman in the state, DSP Ahmad Muhammad, said two persons were arrested around Choba with fake INEC materials and another nine picked in Tai local government area.

Materials arrived late in several wards in the state which the shootings helped to dampen voters’ enthusiasm. Ikwere local government area, the base of Rotimi Amaechi, the immediate past governor of the state and incumbent Minister of Transportation, was, however, an exception as there were accounts of impressive turn out of voters. Amaechi voted in his Ubima Ward  8, Unit 14, and refused to comment on the progress of the elections.

Fake INEC materials There were allegations of fake INEC materials in circulation in some voting units in Degema. In Ward 12, Unit 11, Degema, one Sam Goodluck alleged that fake result sheets were  brought to the polling unit.

Meanwhile Governor Wike, who  voted in his Ward 9, Unit 7 in Obio Akpor local government area, expressed dissatisfaction with INEC’s preparedness for the exercise.

Speaking on the polls, he said: “I stood for over five minutes before the card reader captured me. “Generally on the part of INEC, I cannot give them a pass mark now on preparedness.  If they are facing challenges, they should let the world know than going to the field when they are not ready, “People have expected that the elections  will not hold because they are saying that there were fake result sheets everywhere.

I called INEC and let them know about the development. “INEC is not properly prepared but security agents are doing their best.”

The State REC, Mr Aniedi Ikoiwak, however, dismissed the insinuation of poor preparation as he pushed the blame on the political actors who he said violated the spirit of the game who through their violent conduct prevented the commission from moving election materials to some areas.

“I don’t think there was anything like fake result sheets. You can imagine what you think but what we know in the commission was that only a result sheet was produced and you cannot say a thing that does not have a duplicate is fake because fake must be compared with the original.

So what we had was the original; the fake may be in the imagination of those making such an allegation”.