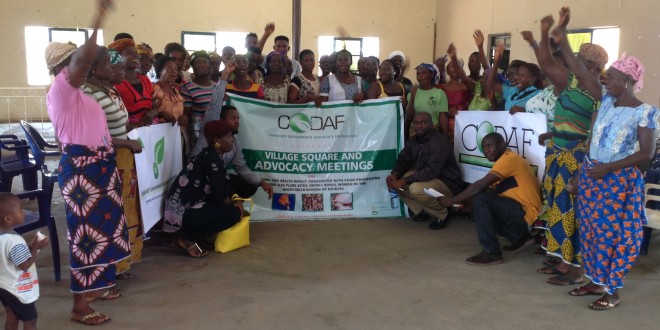 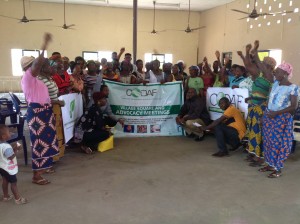 A non governmental organization, Community Development Advocacy Foundation (CODAF) has condemned Shell activities at Uzere community Isoko South, Delta state. The group at an advocacy meeting with the theme “addressing the health impact associated with food processing around gas flare sites among rural women in the Niger Delta region of Nigeria.” called on Shell to stop gas flaring in the community as it affects the women through their daily exposure of their food wares otherwise known as kpokpo garri to the toxic flare of the gas.

Speaking on behalf of the women during the meeting, Mrs. Paulina America said that “Shell has abandoned their responsibility, sold their facilities, duped Uzere women and ran away. No one can run away from its shadow.

In her contribution, Mrs. Bishop Justina also said that “We have been victimized by gas flaring and the activities of Shell generally. The oil company has succeeded in using its divide and rule tactics to cause division in our community. We have complained before that we cannot live with the fire and we don’t want the fire because we have our own fire. Our women are prone to different ailments, most especially those that dry their food items around the gas flare sites, when they return from the site they suffer depression, respiratory illness and high blood pressure. We have accused Shell before that their activities are responsible for the poor agricultural yields and the hunger in the community.

We are still accusing them that the negative impact of their activities still lingers. I repeat “we want Shell and other oil companies that have anything to do with our oil to put off the fire and pay for the havoc they have caused to us. We accuse the oil companies again that they are responsible for the debt burden on Uzere women, the poor agricultural yields and for the fact that we cannot buy crops and seedlings. Shell and their cronies must compensate us heavily for polluting us”.

CODAF Boss, Benin Richard said that gas flare has continued unabated in the Niger Delta oil producing communities. He noted that Nigerian gas reserve is estimated to be over 170 trillion cubic feet, and only about 50% distribution rate each between Associated Gas (AG) and Non-Associated Gas (NAG), according to Department of Petroleum Resources (DPR) and only a small fraction of this quantity is currently being utilized. Noting further he referred to Organisation of Petroleum Exporting Countries’ (OPEC) 2015 Statistical Report which stated that Nigeria produced 86,325.2 million standard cubic meters of gas and flared 10,736.8 million standard cubic meters in 2014. Also, NNPC disclosed that Nigeria lost up to $868.8 million, about N173.76 billion to gas flaring in 2014.

Benin Richard also expressed dismay over the altitude of Shell for shortchanging the Uzere people by transferring their facilities to National Petroleum Development Corporation without addressing decades of environmental problems created by them. Benin Richard said the community will continue to accuse Shell and that NPDC should be ready to accept responsibility for all the problems that was created by Shell that still lingers in the community today. The Director of CODAF said that there is hardship in Uzere, because of poor agricultural yields and the debt burdens the women has incurred in buying seedlings that their drained soil by Shell’s activities have rendered unproductive.