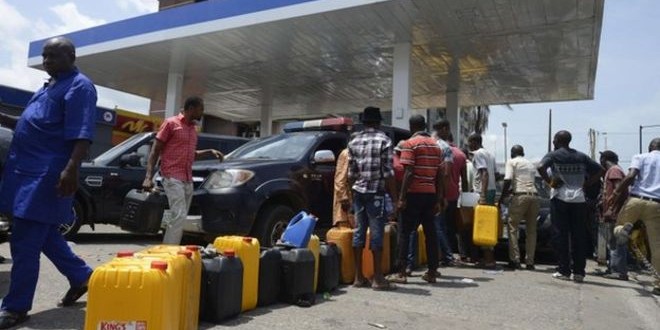 March 14, 2016 Comments Off on Fuel Scarcity Bites Harder As Electricity Generation Improves Across The Country 9 Views 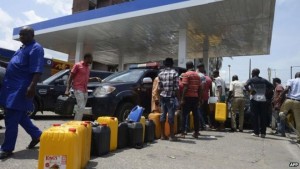 This is even as the Minister of State for Petroleum Resources, Dr Ibe Kachikwu, said he was engaging the Central Bank of Nigeria, CBN, on the possibility of making foreign exchange, FOREX, available to oil marketers to enable them continue importation of petrol.

About 300 truckloads of PMS are being distributed to the Lagos area alone daily, while Abuja gets up to 260 truckloads, with a view to easing the scarcity without success. Those who cannot afford the long wait simply get reprieve from the black market at very high cost.

It sells at about N200/litre in the black market. Similarly, just as power generation rose appreciably since the last lows to 3,098.8 megawatts, MW, yesterday, there was no commensurate increase in electricity supply to homes and businesses, with many parts of the country still wallowing in darkness and generating their own power at almost triple the amount, in view of the current shortages.

Most filling stations remained closed, yesterday, while the few that had the scarce commodity were besieged by a deluge of motorists queuing to get the products.

The Director, Commercials, Pipelines and Products Marketing Company, PPMC, Mr. Justin Ezeala, in a telephone chat with Vanguard, decried the incidence of hoarding in most parts of the country, which he said was exacerbating the crisis.

Ezeala said: “The major problem is hoarding of products. We have increased the truckloads to Lagos to about 300 trucks daily, up from 200, and Abuja to 268 daily, from 180 trucks and yet people cannot get the product.”

In addition, he disclosed that there were a number of cargoes laden with petrol waiting to berth at the jetties and depots, adding that PPMC was still on with its one cargo per day programme, aimed at ending the shortages.

He, however, noted that there was not much the government or NNPC/PPMC could do if some unscrupulous marketers continued to sabotage their efforts by hoarding the products, and urged the regulatory agencies to quickly apprehend and sanction such culprits.

He said efforts were concentrated mainly in the Lagos and Abuja areas because of their strategic importance to the nation. “Once these two cities have been taken care of, we will proceed to contain the shortages in other areas of the country.”

However, Kachikwu, said the collaboration between CBN and NNPC would ease the burden on the Nigeria National Petroleum Corporation, NNPC, which is currently the sole importer of petrol. The minister said this was because other marketers were said to have stopped importation of the product, citing difficulty in accessing FOREX.

According to Kachikwu, the ongoing talks with the CBN will help ease marketers’ access to FOREX and consequently improve fuel supply situation in the country. This, he noted, was already beginning to weigh in on the capacity of the NNPC to satisfy the country’s 40 million litres’ per day consumption.

“While majors are really not bringing in products, we are working on long term solutions so they can begin to go back to importation lanes and be able to service their own outlets rather than us servicing them and servicing everybody because it is a lot of wear and tear on our capability status,” he said.

Kachikwu, however, expressed hope that the two-week scarcity would ease off within two days, following NNPC’s massive increase of petrol truck-out to depots and filling stations in the country.

He also said the NNPC was flooding Abuja with over 300 trucks, adding that he was hopeful that the queues would clear off in about two days.

While hinting that he would initiate a long term solution to curb the resurgence of fuel scarcity in the country, Kachikwu said:  “We are obviously not getting it as well as we should. Again, I apologise to Nigerians for all the pains, nobody wants to see people spend up to two hours on fuel queues.”

Commenting on the issue, former Managing Director, NNPC, Chambers Oyibo, said the move was in the right direction. He said:  “If we are importing most of our fuel, importation means expenditure on foreign exchange.

Special arrangement should therefore be made for marketers who are supposed to supply fuel to Nigerians. “Nigerians need fuel. Nigerians need energy to power their businesses. FOREX needs to be available to marketers.”

However, the Chief Financial Officer, CFO, Eroton Exploration and Production Company Limited, Frank Ihekwoaba, said the move was another way of introducing subsidy. He said:  “For the FG to intervene on supporting the marketers to raise FOREX for importation of Petrol is to create a new subsidy regime while preserving the old.

“It is like telling a new lie to cover up old lies. FG does best in creating transparent and coherent guidelines that forces can follow.”

Meanwhile, increase in power generation has not brought any succour to Nigerians, as those who cannot fuel their generating sets remain in darkness.

Data from the Nigerian Systems Operations Department of the Transmission Company of Nigeria, TCN, website,www.nsong.org, indicated that power generation peaked at 3,098.80MW as at  01:27:00  yesterday, which was almost double the capacity as at  Wednesday, when it was 1,580.6MW. Many of the consumers spoken to wondered where the power was going to because according to them, “nothing has changed.”

Specifically, residents in Ikeja, which has the highest allocation because of its size, are the worst hit, as very few areas under the distribution zone had experienced any form of power supply in the last two weeks.

At the weekend, the Federal Government had blamed the endemic power failure on vandalism and sabotage, with the Minister of Information and Culture, Alhaji Lai Mohammed, apologising to Nigerians for the poor power situation witnessed over the past few weeks.

However, the minister’s claim that generation had risen to about 4,000MW was at variance with the data from the Nigerian Systems Operator, NSO, which revealed a much lower figure.