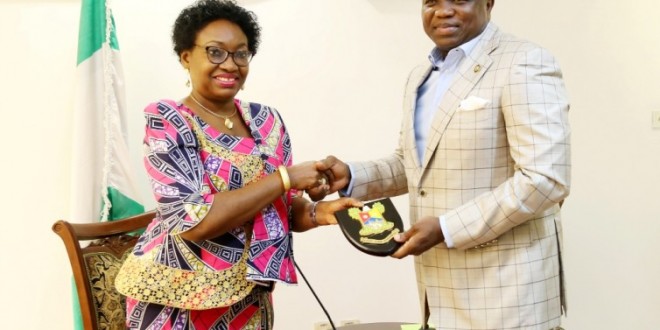 Lagos State Governor, Mr. Akinwunmi Ambode on Friday restated his administration’s commitment to reforms in the state civil service, saying that only a viable workforce can drive the policies and programmes of any government.

The Governor who spoke when he received the Head of Service of the Federation, Mrs Winifred Oyo-Ita, on a courtesy at the Lagos House, Ikeja, said he remains a strong supporter of public service reforms, adding that any government desirable of making positive change in the lives of the citizenry must have a motivated and trained workforce.

“We do not have any choice, because the engine room of whatever it is that is our policy or programme is actually in the public service and in the civil service, so it is important that we must tag along on the same wave length with all the civil servants for us to be able to achieve all the programmes our party, the APC has decided to put across to all Nigerians,” he said.

He assured Mrs. Oyo-Ita of his administration’s continuous support to enhance the partnership between the state and federal government in the areas of training and retraining of public servants, saying that it was germane to ensuring continuity in governance.

“So it is in our better interest that we enhance this relationship. I give you my commitment further to say that there is value in it, it is important that we build a virile civil service that can stand the test of time that even when programmes do change or parties do change, the bull work of the machinery of deliverables to our people which is the civil service, remains very strong. That is what I am committed to”.

He also pledged his commitment to collaborate with the Federal Government on enhancing the commercial nature of the public service, expressing optimism that it if put in the right perspective, it could engender economic growth and increase the GDP of the nation.

Earlier, Mrs. Oyo-Ita said she was in Lagos to visit some of the federal institutions in the state, just as she sought the Governor’s support towards revving the comatose nature of some of the federal training institutes so as to make them efficient.

“I am very passionate about training and retraining civil servants. No doubt, you will agree with me that no matter how eloquent and excellent the policy thrust of government may be, the civil service is the engine room and if the workforce are not well trained they cannot in anyway bring to realisation, the lofty goals of that administration and that is why we are looking back into what we have already developed over the years but somehow, it has been left to decay.

“When you see what is going on in our training institutes, for example, the Federal Training Centre in Lagos that I visited yesterday it needs a lot of work to bring it back to the level that it is expected of it. That is why I am putting a lot of effort into restructuring our training institutes, the facilities, they have the infrastructure and the resource persons, its curriculum and so on, so that we can bring it up to an international level whereby we have people coming from other African and West African countries as it happened in times past. This is one place we need your support,” she said.

Oyo-Ita also highlighted the intentions of her office to improve on the commercial orientation of Ministries, Departments and Agencies (MDAs) of the Federal Government, saying the economic downturn has made it imperative for MDAs to become more commercial oriented.

She lauded Governor Ambode’s strides in the last nine months, saying that the impact of his policies and programmes are already being felt across the state.

“Indeed it is an honour to be given this opportunity to visit and pay a courtesy call on my own brother and classmate. When we left UNILAG in 1984, we never thought that when we meet, we would be meeting in this capacity because we were wearing jeans and tee-shirt and snickers and just going our happy way. We thank God for what he has used us to do in our various environments.

“That is why I am here to congratulate you on your well deserved election and appointment as Executive Governor of Lagos State, we are already seeing what you are doing in this state, you are continuing with the zeal and passion of your predecessors,” she said.