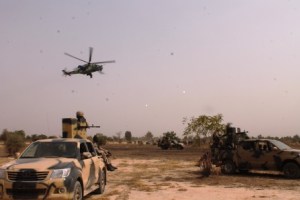 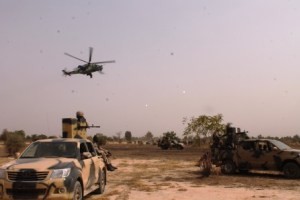 Boko Haram fighters have abandoned their camp at Iza, Borno State and fled into Sambisa Forest after their location came under heavy air attacks by the Nigerian Air Force.
The success of the air attack paved way for the follow-up clearance operation by own troops of 121 Task Force Battalion who consolidated on the gains of the air strikes to flush out Boko Haram remnants and the destruction their leftover camps.
A statement by the Director of Public Relations and Information, Group Captain, Ayodele Famuyiwa said during the ground movement, Mi-35 Helicopter gunships were overhead to provide Close Air Support for the advancing troops while Air Force Beechcraft aircraft supported with Intelligence, Surveillance and Reconnaissance.
The combined air and land operation against the Boko Haram operatives according to him, was conducted during the early hours of Tuesday.
The fall of Iza and its liberation by own troops further attests to the recent gains recorded by the military in the combined efforts to rid the Country of the menace posed by the religious sect.