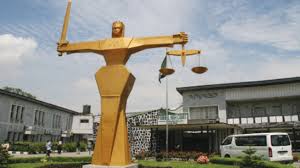 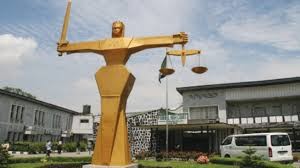 A coalition, Civil Society Network Against Corruption (CSNAC), has urged the President Advisory Committee on Anti-Corruption, to investigate and sanction the chief Judge of the Federal High Court, Justice Auta for allegedly contravening the code of conduct for judicial officers.
In a petition signed by CSNAC chairman, Mr. Olanrewaju Suraju and addressed to the chairman of the commision, Prof. Itse Sagay, the anti-corruption coalition said the commission should investigate the introduction of Chief Michael Igbinedion to Hon. Justice Auta at a book launch in honor of the justice as well as the donation of N8million at the book launch by Igbinedion who was standing trial at the High Court before the donation.
The petition read: “In its publication of 18th February, 2016, Premium Times, an online newspaper reported that The Economic and Financial Crimes Commission has accused Mr. Rickey Tarfa, a senior Nigerian lawyer, of having a long history of manipulating courts and improperly communicating with judges. Mr. Tarfa, in defence instituted a Fundamental Rights Enforcement Action against the Commission. In the course of the proceedings, several startling revelations were made by the Commission.
“The report stated that in furtherance of his unhealthy relationships and communication with judicial officers, Mr. Tarfa sometime in April 2015, attended a book launch in honour of Ibrahim Auta the Chief Judge of the Federal High Court, in the company of Gabriel Igbinedion, who was the chief launcher. At the event, Mr. Tarfa introduced Mr. Igbinedion to judges and senior lawyers who attended the programme. In the counter affidavit deposed to by one Moses Awolusi, an investigator on behalf of the EFCC, he stated as follows:
“That I know as a fact that in spite of the Applicant’s knowledge of Rule 3(f)(j) of the Code of Conduct for Judicial Officers which stipulates that ‘A judicial officer and members of his family shall neither ask for nor accept any gift, bequest, favour, or loan on account of anything done or omitted to be done by him in the discharge of his duties’ the Applicant did not advise his client not to donate the said sum of N8 million to the Chief Judge of the Federal High Court. Now shown to me and marked Exhibit ‘Q’ is Thisday edition of 3rd May 2015 capturing the proceedings of the launching including role of the Applicant”.
Furthermore, the report also stated that in the said affidavit, the investigating officer also stated “That I know as a fact that the Applicant’s client, Chief Gabriel Igbinedion made the donation of N8m at the referred occasion to the Chief Judge of the Federal High Court in spite of knowledge by Chief Gabriel Igbinedion that his son Michael Igbinedion who had been convicted was awaiting the sentence of the Federal High Court in criminal proceedings pending against Chief Gabriel Igbinedion’s son (Chief Michael Igbinedion) before the Federal High Court”.
While noting that shortly after the book launch and donation of the said N8million, Chief Gabriel Igbinedion’s son Michael was sentenced to 1 year imprisonment or a paltry fine of N1million in questionable plea bargaining that sparked outrage among Nigerians
“It is trite that the Code of Conduct for Judicial Officers is replete with several provisions on the conduct and relationships of judicial officers with members of the public.
“The Code of Conduct prohibits judicial officers from unnecessarily fraternizing with members of the public that could result in putting the course of justice in jeopardy as well as causing embarrassment to the judiciary.
“The noncompliance with the provisions of the rules can be seen as exemplified by the questionable plea bargaining procedure Chief Gabriel Igbinedion’s son benefitted from shortly after his introduction to Hon. Justice Auta and the donation of the aforementioned sum.
“CSNAC is therefore by this petition calling for a thorough investigation of the circumstances surrounding the introduction of Chief Igbinedion to Hon. Justice Auta, as well his donation of N8million at the book launch. The presence of several lawyers at the book launch should also be thoroughly investigated as this could create conflict in the exercise of his duties as a judicial officer, since the crop of senior lawyers who were in attendance are likely to come before his court.
Post Views: 0