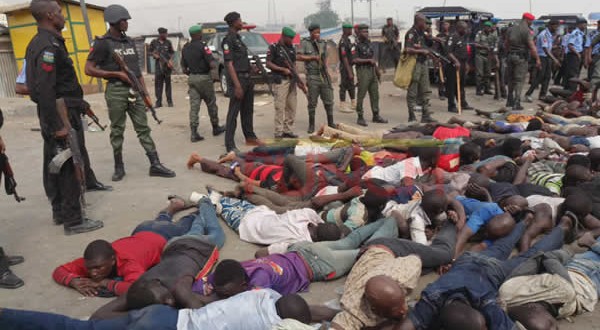 Reports reaching The PUNCH say the clash that started in the Mile 12, Ketu area of Lagos State, on Thursday, has spread to other areas in Kosofe this afternoon.

The situation in Agiliti where the fracas started is still tense. People have been seen moving out in droves.

In a series of tweets, residen

ts have been beckoning on the police to come to their rescue.

Bloody clashes in the Mile 12, Ketu area of Lagos State on Thursday left no fewer than 10 persons dead and about 100 others injured.

Among the dead were two schoolchildren, traders, artisans and residents.

A two-year-old boy, Andrew Daniel, was abducted by some hoodlums and taken away after his father, Igba, was attacked with machetes and left for the dead.

The PUNCH, which witnessed part of the clashes as it unfolded, counted no fewer than 40 vehicles that were either burnt or vandalised in the Agiliti area of Ketu.

Two churches and over 20 houses were equally set ablaze and hundreds of residents rendered homeless in Maidan community as a result of the violence which was said to have broken out after a disagreement between some Yoruba and Hausa in the area.

Motorcycles, sewing machines and other working tools were also destroyed while some shops were looted and razed.

Corpses of slain residents, who were either burnt or beheaded, littered the roads as of 5pm when one of our correspondents left the battle areas.

Despite the heavy presence of security personnel, the hoodlums, mostly Hausa, who wielded bows, arrows, cutlasses, charms and stones, refused to vacate the roads.

They also attacked the Lagos State Commissioner of Police, Fatai Owoseni, who tried to calm them down before leaving the community around 1pm.

After the situation had been brought under control by the police, officials of the Rapid Response Squad and military officers, no fewer than 70 suspects were arrested.

It was gathered that the fight started on Tuesday at the Agiliti area after some residents attacked a motorcycle rider for riding against traffic and almost knocking down a pregnant woman.

A resident, who spoke on condition of anonymity, said, “The motorcycle rider, a Hausa, almost hit a pregnant woman and people challenged him for riding against traffic.

“Because he didn’t understand English, he misunderstood them and attacked them, which started a fight. A man, who took up the fight with the Hausa man, stabbed him. The Hausa man also stabbed the man.”

The resident said on Wednesday the Hausa apprehended a Yoruba motorcyclist, who committed a similar offence, and attacked him.

“The Hausa people dragged him on the tarred road and I saw how his skin peeled while he raised the alarm. People told me to keep quiet that it was ordinary motorcycle they were dragging.

“But when they took a closer look and discovered it was a human being, they tried to rescue him but he was dead,” he said.

The clash was said to have aggravated by Wednesday night as the Yoruba allegedly attacked the Hausa residents, where one person allegedly died.

By Thursday morning, the Hausa reportedly mobilised to avenge the death of their men, but were pushed back by the Yoruba.

Residents told one of our correspondents that the fight escalated around 11am on Thursday when the police and some soldiers arrived at the scene and shot at the Yoruba camp, which forced the members to retreat.

A resident, Jamiu Adio, said the police shot directly at the men and injured some of them.

He said, “The Yoruba had to run back and that created an opportunity for the Hausa to enter into the community to wreak havoc.

“The Hausa, backed by the soldiers and the police, set schools on fire and started burning vehicles in Agiliti. When they were done, they broke into Maidan community and burnt 15 houses, including a church.

“They chased a carpenter, Riliwan, and after catching up with him, they cut him with machetes. They poured fuel on him and set him on fire. He was burnt to death.”

Our correspondent saw the burnt corpse of the victim, covered with a cardboard paper.

The only link bridge into the community was also destroyed by the rampaging Hausa.

A church, PODAM, was equally torched and some of their equipment vandalised.

A shop owner, Mrs. Bilikis Yusuf, said she lost two of her sewing machines and some money.

“The Hausa have ruined my life. They looted my industrial machine, black machine and stole thousands of naira from my wardrobe. Where will I start from?” she asked.

Another resident, Modinat Adeyemi, said she moved into the community four months ago, adding that she had lost all her property.

“All I have right now is this blouse I am wearing,” she added.

One of the residents, Mr. Sunday Nejo, who held his two schoolchildren with his wife beside him, said he was going to find a place for his family.

While his wife wept, he said, “I have nothing again. It is only what we are wearing right now that we have. Every other thing has been burnt to ashes. We are homeless and helpless.”

In a mechanic garage in the Agiliti area, one of our correspondents counted 27 burnt vehicles, while a Cherubim and Seraphim Church, which had just been completed, was equally razed.

Five cars – a Nissan Pathfinder, Sienna, Honda Civic 320 Benz and Toyota Forerunner – were still smouldering when one of our correspondents visited the area.

The owner of the Benz, Jimoh Jubril, said he bought it four months ago.

He said, “We were inside the house where we watched everything happen. The police and the soldiers conspired and shot at our boys and that allowed the Hausa to come in. This was nothing but a compromise of our security systems.

“They burnt all our five cars, one of which belonged to a man that just came to visit me. Another is for the pastor of the burnt church, while the Benz is mine. I bought it four months ago.’’

A resident, Bola Ariyo, said two schoolchildren were beheaded by the invaders.

“About four people were killed on this road alone. Two of them were schoolchildren, who were just returning from school. The Hausa cut off their heads. There were also two Hausa, who were burnt to death by some Yoruba.”

A resident, who claimed to know, alleged that the Hausa invaded a secondary school and allegedly killed four students.

A resident said a popular Igbo trader, who sold gas in the community, was also hacked to death by the Hausa.

The father of two-year-old Daniel said his son was seized after the Hausa thought he (father) was dead.

“They hit my head with cutlass and I fell down. They cut me also in the hand and I pretended to be dead. They checked to see I was truly dead and when they were satisfied, they left.

“They took my child and were saying, ‘let us go and kill the child too’. I have not seen my child since then,” he said.

A soldier, who confirmed the account, said he saw the Hausa taking away the child and he could not tell what they did to the boy.

The victim’s mother was seen by one of our correspondents weeping as people consoled.

One of our correspondents observed as some soldiers wrestled with one of the Hausa suspects, who was arrested with a cutlass and a charm.

A soldier said the suspect was caught red-handed while setting fire to a vehicle.

He said, “He was one of the masterminds of the arson. We caught him red-handed and he dared us to come after him, saying we cannot do anything. We arrested him, but he’s been proving hard and difficult.”

The suspect, along with over 70 others, was later asked to lie down in the open space as the police tried to send signal for a bus to convey all the suspects.

Around 3pm, a red LAGBUS arrived at the community to convey them to the Lagos State Police Command Headquarters.

As a result of the heavy fighting, hundreds of commuters between Ikorodu and Ketu resorted to trekking.

Fully-loaded BRT buses, heading towards Mile 12 from Ikorodu, were forced to stop around the Majidun area for several hours while other vehicles were seen making emergency turning along the highway.

Also, commercial motorcyclists of Hausa origin deserted Ketu and Mille 12 by Thursday afternoon, leaving many people to trek distances that they usually covered on bike.

Bands of young men were seen wielding dangerous weapons like axes, cutlasses, clubs and even rakes between Irawo Bus-stop and Owode-elede, on the deserted expressway threatening to kill and burn down any Hausa seen in the area.

When one of our correspondents visited Maidan, a small neighbourhood close to Mile 12, to assess the situation, angry youths, who also wielded dangerous weapons, threw foodstuffs like onions, tomatoes and pepper, said to belong toHausa traders on the road.

At another section, people were also seen untying rams abandoned by the owners and making away with them.

The Police Public Relations Officer, Dolapo Badmus, had yet to respond to a text message sent to her as of the time of filing this report.

Meanwhile, the Lagos State Governor, Akinwunmi Ambode, has ordered the closure of the Mile 12 Market and imposed a curfew on four streets in the area.

Ambode, who spoke at the State House, Ikeja, said the closure of the Mile 12 Market and the curfew would help security agents to restore peace.

He added that the curfew would only affect four streets — Oniyanrin, Maidan, Agiliti 1 and Agiliti 2.

He said, “In order to further restore peace to the community, I have ordered that the Mile 12 Market be temporarily shut. I advise traders and other stakeholders to eschew violence and be law-abiding.

“Furthermore, I have ordered temporary restriction of movement in four streets, namely Oniyanrin, Maidan, Agiliti 1 and 2.”

The governor said the police and other security officials were managing the situation, adding that some hoodlums had exploited a minor clash to cause a breakdown of law and order in the area.

Owoseni, however said policemen had been deployed in the area to enforce the order of the governor, adding that nobody died in the clash.

“I was there personally; there was no record of death. There was no fire in the market, and as I speak to you, over 50 persons have been arrested.

“But within Agiliti community, houses were burnt by miscreants,” he added.

Asked to react to the allegation that the police were among those who opened up the community for attack, he said, “Well that is their perception and they are entitled to it.”

A man, said to be the leader of the Hausa community, who was working with the security officials, when asked for his reaction, said, “Please I am not ready to say anything. You can see the tension everywhere.”

Share
Previous Jonathan’s ADC Regains Freedom
Next You Are Empty, Go and Amend Your Ways With Your Ex-Wife, Concubines, Oshiomole Tells Melaye