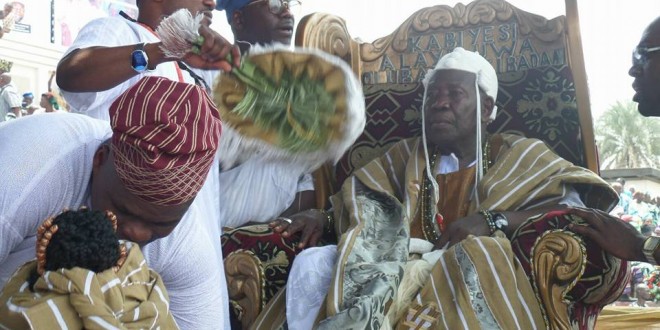 March 4, 2016 Comments Off on IbadanAgog As Adetunji Is Crowned 41st Olubadan 16 Views 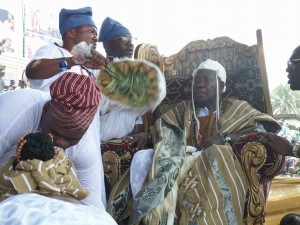 The ancient city of Ibadan was agog on Friday as High Chief Saliu Adetunji was crowned the 41st Olubadan of Ibadanland. Adetunji, 87, was crowned at about 10.51 a.m. by the 10th Oluwo Afobaje of Ibadanland, Chief Idowu Popoola.

Adetunji, a doyen of the music industry and the former Balogun of Ibadanland, arrived the Oluwo Afobaje’s palace, Oja Oba, at exactly 9.52 a.m. Adetunji, clad in the traditional Aso-Oke, arrived in a Peugeot 307 CC 180 with registration number KJA 701 DZ, to commence the traditional rites.

Before arriving at the palace,lAdetunji was at the Oluwo Afobaje palace to undergo traditional rites as expected of a new monarch. The new monarch left the Afobaje’s palace at exactly 10.18a.m. to the Afobaje arcade where he was crowned.

The new king, who also performed the calabash selection event, picked the Money Calabash, a reflection that his reign would depict prosperity. S

peaking at the event, Popoola, the Afobaje, described the coronation ceremony as unique in the history of Ibadan, commending Gov. Abiola Ajimobi for his support.

He also commended Globacom and producers of Eagle Aromatic Schnapps for their unflinching contributions and support to the coronation.

Popoola said that the new king became a Mogaji during his father’s reign as the Olubadan in 1976. He said that Ibadan began to use the appellation “Olubadan of Ibadanland” under the reign of Late Oba Abas Aleshinloye in 1936. Adetunji, the only king to be installed by an Ibadan indigene as governor, has his formal title as Oba Saliu Adetunji Aje Ogungunniso 1.

The members of the Olubadan-in-Council led by High Chief Lekan Balogun, the Otun Olubadan of Ibadanland and High Chief Rasheed Ladoja among others paid the traditional respect to the new king.

The new King left for the Ose-Meji Shrine where he went through some other spiritual rites before proceeding to the Mapo Hall Arcade. At the arcade was the handing over of the staff of Office to the new king by Gov. Ajimobi of Oyo State.

Share
Previous You Are Empty, Go and Amend Your Ways With Your Ex-Wife, Concubines, Oshiomole Tells Melaye
Next FG Compels Merger Of Ship Owners’ Splinter Groups