Revealed: How Blair charmed Jonathan, And Failed in Seducing Buhari

March 1, 2016 Comments Off on Revealed: How Blair charmed Jonathan, And Failed in Seducing Buhari 33 Views 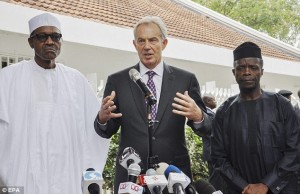 Revelations from a new book by British investigative writer, Tom Bower has provided an insight into how former British Prime Minister, Tony Blair has been traveling and  making millions of dollars brokering deals in many parts of the world.

Excerpts of the book depicted Tony Blair as a man who lacks moral in his aggressive drive to enrich himself.

The book narrated the contrasting experience of Blair’s relationship with former president Goodluck Johnathan and President Muhammadu Buhari.  It gave insights into how the former British Prime Minister charmed his way into Jonathan’s heart that he gave Nigeria’s $1 billion Sovereign Wealth Fund to JP Morgan a company that pays wages to Mr Blair.

Blair according to the book ,after requesting for a one on one meeting with the president “ having charmed the president and — in the words of Jonathan’s staff — satisfied his ego, Blair then introduced him to J.P. Morgan chief Jamie Dimon.. The banker offered to manage Nigeria’s sovereign wealth fund — and Jonathan agreed. No other bank in the world was asked to tender for this profitable work”

Blair was however unsuccessful with his attempts at warming his way into the good books of President Buhari.

After flying into the country in May 2015 after the inauguration of the president,” Blair introduced himself grandly as ‘Britain’s most successful Prime Minister’ and then launched into his practised sales pitch.”

‘I pioneered the skills to make government work effectively,’ he told the president. ‘The Delivery Unit is the leader’s weapon to make his government effective across the civil service and country.’

He even offered to establish a delivery unit within Buhari’s government, with paid staff. But the president — a former army general and military dictator famous for imprisoning his opponents without trial — looked bored.

He even played the special emissary card when he suddenly announced that “I have a personal message for the president from David Cameron.”

But it was nothing of the kind. Twenty minutes later, Buhari emerged looking noticeably disgruntled.

The book revealed that after realising he could not get Buhari’s attention he moved in on the senate president who is regarded as the third most powerful man in the country.

“Six weeks later, in London, he met Bukola Saraki, the president of the Nigerian senate and third most powerful person in the country.”

“This time, as he discussed opportunities to introduce investors from the Middle East to Nigeria, he was more successful. ‘We’d like that,’ said Saraki — who was fully aware that Blair now also represented a wealth fund based in Abu Dhabi.”

“Yes, he certainly has had briefings on Boko Haram. He is very interested in Boko Haram because it concerns directly the work of his foundation which is about countering extremism.”

Share
Previous Halt The Assault On The Ekuri Community and Forests-HOMEF
Next Ese, “Abducted girl” Flown To Abuja