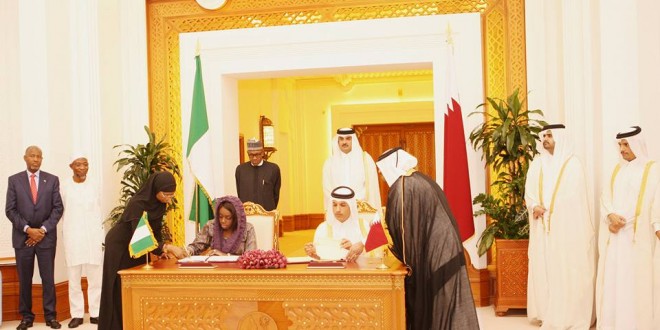 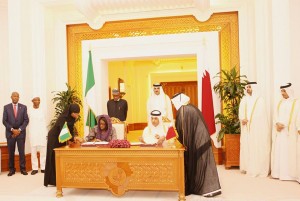 Nigeria and the State of Qatar on Sunday in Doha signed Bilateral Air Services Agreement (BASA) to pave way for direct flights between major cities of both countries.

Both countries also signed an agreement to avoid double taxation and tax evasion on the sideline of President Muhammadu Buhari’s state visit to Qatar.
The Minister of State for Aviation, Senator Hadi Sirika, representing President Muhammadu Buhari, signed the air services agreement on behalf of the country while Qatar’s Minister of Transportation and Communications, Jassim Bin Saif Alsulaiti, signed on behalf the Emir of Qatar, Sheikh Tamim Bin Hammad Al-Thani.
The agreement which was signed in the presence of both leaders is expected to pave way for more direct flights between major cities of both countries on the principle of reciprocity by the designated airlines on behalf of the country.
Sirika said after the signing of the agreement that the accord would promote trade, commerce, tourism and travel between both countries.
“Qatar is the richest country in the world at the moment in terms of per capita income, their economy is strong and their national carrier, Qatar airlines, is one of the most viable and most focused in the industry.
“They (Qatar airlines) presently fly to Nigeria but they want to fly to more cities and with the focus of the present administration in Nigeria on establishing a national carrier, we have commenced discussions on how we can partner with countries like Qatar in our quest to establish a national carrier”.
The Minister of Finance, Mrs Kemi Adeosun, who signed the agreement for the avoidance of double taxation and the prevention of fiscal evasion with respect to taxes income with her Qatari counterpart, Ali Shareef Al Emadi, expressed delight that the agreement which was negotiated since February 2015 has been finalised.
“What is symbolic in this agreement is that the Qataris who are already investing heavily in Nigeria will bring in more investments because the earlier lack of an agreement to avoid double taxation was a stumbling block to some of the investors.
“I am very confident that the signing of this agreement will bring much more investment and business between Qatar and Nigeria,” she told reporters after signing the agreement.
In his remarks to journalists, the Minister of Foreign Affairs, Mr Geofrey Onyeama, said President Buhari and Sheikh Al-Thani had fruitful discussions on security, oil price stability, and the fight against corruption in Nigeria.
“The Qatari leader acknowledged that President Buhari has really created an enabling environment for businesses to thrive in the country.
“The Emir made the point on the war against corruption in Nigeria and the progress President Buhari is making in that front and they are of the opinion that if that problem is addressed with focused polices, the country will progress.
“The Emir also made it clear that the Qatari’s are ready to invest in Nigeria in a big way”, he said.