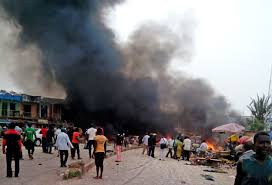 A security source confirmed the , saying the incident happened around 12pm. Sani Dati, spokesman of the Adamawa state emergency agency, also confirmed the attack but did not give details.

“Yes it is true that there was a bomb blast in Jimeta but I don’t have the details at the moment,” he said. “Our men are on ground and we are in touch with them.

The actual information will be made available to the public in the next 30 minutes.” Mohammed Gazali, commissioner of police in Adamawa,  said the incident was caused by bombs recovered from Boko Haram insurgents.

Gazali told journalists that the recovered bomb exploded from the store used by the police command to warehouse exhibits. He said that most of those affected by the blast were policemen.

“Policemen were mostly affected and we don’t know the actual casualties for now as the place is not yet safe for us to go in,” he said.

The explosion also affected the walls of Majalisa Primary School where some pupils were injured. Ahmad Sajoh, the state commissioner for information, confirmed that the pupils sustained minor injuries and had been treated and discharged from hospital.

The station where the blast occurred contained offices of the Central Investigation Bureau (CIB), Motor Traffic Department (MTD) and the police tailoring section. The incident has led to hurried closure of markets and schools in the area as residents scamper home for safety.

Share
Previous NFF bigwigs Land In Zurich For FIFA Congress
Next We Must Define A New Common Agenda For Development Challenges In Line With The New Urban Agenda Being Fashioned For The World.