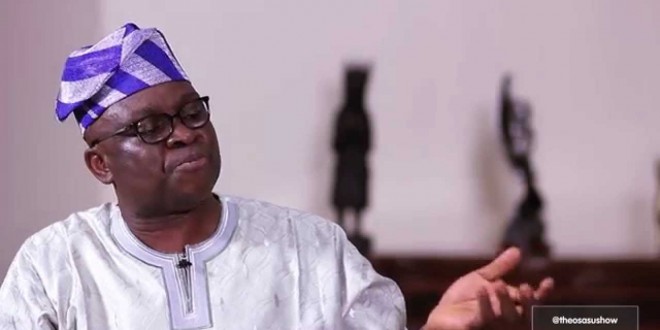 Ekiti State Governor, Mr Ayodele Fayose, has explained how his administration is able to execute some capital projects in the face of serious economic challenges, saying the administration is leveraging on goodwill with corporate bodies and ensuring prudent management of resources.

The governor also said ensuring that capital votes are used for capital projects is another factor.

Speaking through his Chief Press Secretary, Mr Idowu Adelusi, in Ado-Ekiti on Tuesday, the governor stated that the determination to impact positively on the lives of the people despite economic depression was a catalyst spurring the administration on.

“What the administration is doing is that it ensures that there is no diversion and we cannot say because there is economic downturn, we will not do any capital project that will have positive impact on the lives of our people.

Government does not exist to only pay salaries and wages alone, just as the Bible says man does not live by bread and butter alone.

“It is not every Ekiti individual that works with and earns salary from the government. When we pay their salaries, we must also embark on projects that will benefit everybody including those not working in the public service too.

Also, we are making use of the goodwill we have with corporate bodies to get funding for some of our projects.

“For instance, the Funmilayo Olayinka Women Centre near the Fajuyyi Park, Ado-Ekiti was built at no cost to the state government, likewise some road projects. The Bank Road, Ado-Ekiti would soon be reconstructed with support from some corporate bodies. Incidentally, the road was constructed over 10 years ago during my first term with support from corporate bodies as well.

“We are setting the records straight so that some misguided elements, will not through sheer mischief, mislead the people of the state, especially workers, on the issue of delay in salary payment and execution of capital projects. Ekiti people are enlightened and they know that there is no way the administration will only focus on recurrent issues and forgo capital projects,” he said.

Governor Fayose, while appreciating the tolerance of the people in the face of economic challenges, noted that his administration would always give their welfare top priority in its handling of affairs.

“I appreciate your tolerance in the face of economic challenges, but let me reiterate that we are committed to uplifting the welfare of our people.
For us Ekiti comes first and we believe in it over and above all interests,” he added.