February 12, 2016 Comments Off on The Naira Cannot Be Devalued Now, Says Oshiomole 12 Views 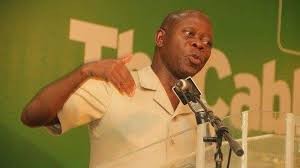 Oshiomhole, who delivered a keynote address at the maiden edition of TheCable Colloquium in Lagos, said the government’s position was to pull speculators out of business. He said a history of devaluation of the nation’s currency since the Structural Adjustment Programme (SAP) has not benefitted the economy in any guise.

“The first time the concept of devaluation was introduced to us by the International Monetary Fund (IMF), it generated a national debate,” he said.
“Chief Olu Falae lectured us about the beauty of devaluation. When you devalue, the price of imported goods will go up, the capacity to consume will drop, and total outflow of forex will be less.
“Nigerian goods will become cheaper, importation will be less and exportation will be more. This will lead to more foreign exchange and will shore up our foreign reserves.”

However, he noted that devaluation had never translated to an approximate increase in exported goods because of ” the appetite of Nigerians for foreign or imported goods”.
He argued that available statistics from the Central Bank of Nigeria (CBN) showed that “the thesis that if we devalue, we will export more, cannot be supported”. “The real critical question is – will devaluation curb our appetite for imported goods? I am unable to find gains in devaluation,” he said.

Oshiomhole added that currency speculators were the ones manipulating the naira, and exerting pressures on the CBN to devalue it, for their selfish gains. He explained that the nation was dealing with pure speculations and assumptions on the nation’s currency because a few profit from such manipulations of the exchange rate. “Some people are speculating on the naira; just manipulating the naira for their selfish ends.
This is how a section of the business community make their money,’’ Oshiomhole said. The former labour leader said that the Nigerian worker had been trapped as a result of the actions of currency manipulators.
He called on well-meaning Nigerians to support the forex policy of the CBN and the stand by the federal government not to devalue the nation’s currency.